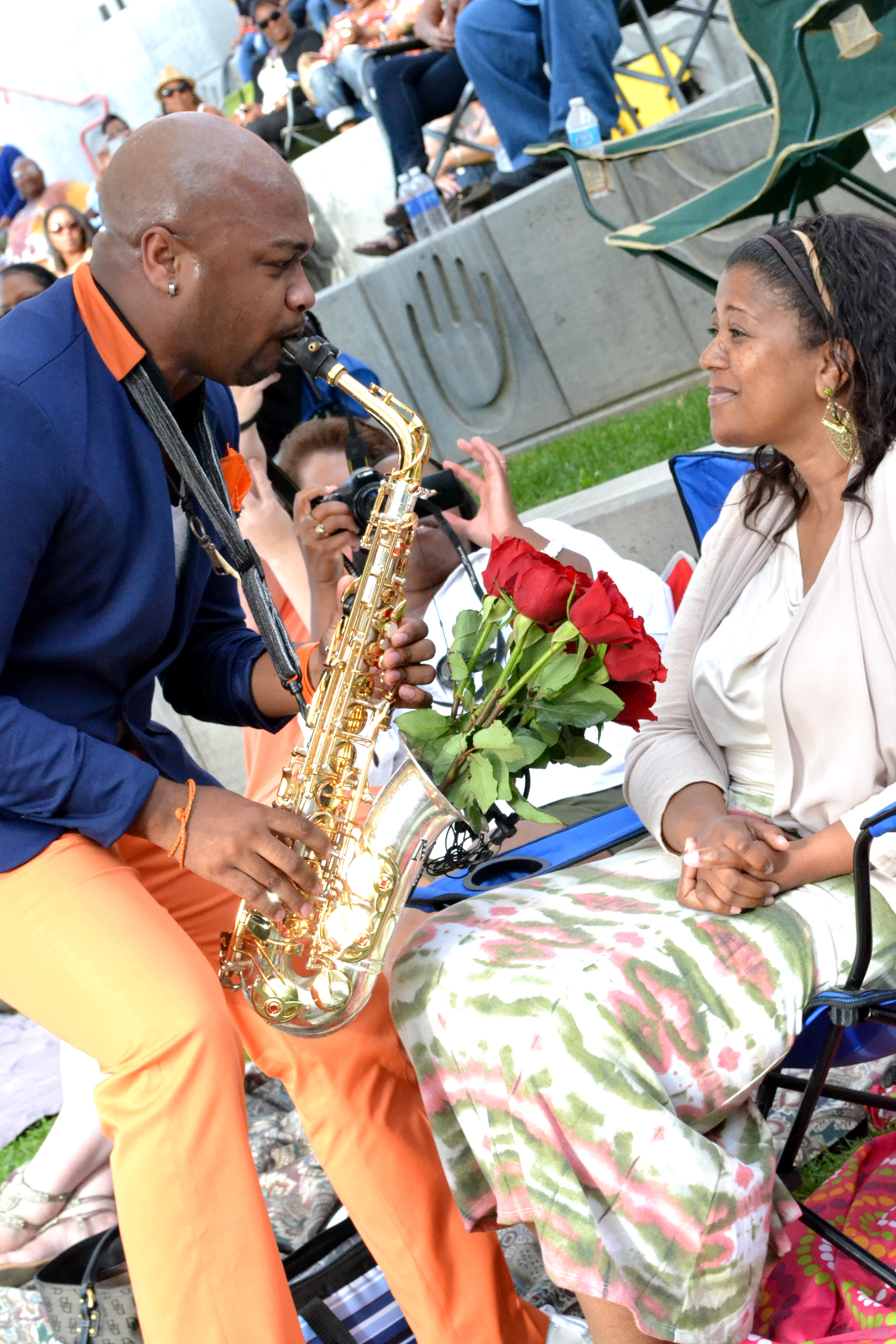 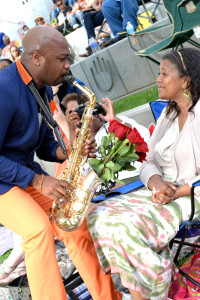 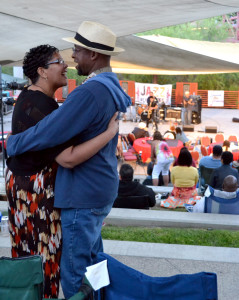 SAN DIEGO – Jazz had found a home at the Market Creek Plaza Amphitheater and its homecoming featured performance from national and local artists alike such as Lanee Battle, Jacob Scensey, Marcus Anderson and Vincent Ingala. The summer concert series, “Jazz at the Creek”, hosted by M.A.N.D.A.T.E. Records Jazz Division, gave local residents a reason to celebrate – and the opportunity to enjoy some “smooth jazz” close to home on Saturday, June 1, from 3-8 p.m.

Local radio personality, Ahmed Dent, gave colorful commentary and emceed the festival while introducing the artists, acknowledging supporters and sponsors. After greeting the crowd, his first task was to bring Jacob Scensey to the stage. This artist got things going and filled the amphitheater with the sultry sounds of his saxophone. Scensey was among the youngest on this billing, but his credentials include an award for the 2013 Warren Hill Rising Star Competition. This garnered him the coveted chance to be the opening act for last months’ La Costa Jazz Festival. This artist showed his mastery of the sax with each song as he played with ease to the delight of the crowd.

Lanee Battle followed with velvety vocals and sang a range of gospel, pop and R&B tunes that got the crowd swaying to the beat. Her melodies blended well with her background singers and seemed to float on the cool breeze moving through the trees and canopy covering the grass covered seats in the plaza. Battle served the audience a sampling of her unique “neo-gospel” from her popular CD releases, including her most recent, “This is my Story” before departing the stage.

Contemporary jazz performer, Marcus Anderson, dazzled on stage with dance moves and riveting renditions on his saxophone. The multi-talented producer, song writer, composer, vocalist, and flutist is no stranger to the stage. His list of accomplishments includes winning the Capital Jazz Fest Challenge, accompanying renowned artists, such as Prince, on tour and four CD releases, the most recent titled, “NOW”. But his charm won over the ladies in the audience as Anderson sweetly serenaded them with roses, song and sweat.

Vincent Ingala, a triple threat, brought the show its climax with a dual attack on his saxophone and guitar. His powerful delivery and vocals had everyone singing along to familiar songs from greats like Smokey Robinson and Lou Rawls, along with genuine cuts from his many releases – the most popular, “Wish I Were There” that spent four weeks on the Billboard Contemporary Jazz charts. Ingala transitioned from sax, to vocals, to guitar showing a full command and love for each talent. The energy shared by this artist, his band and the crowd was so intense that the show ran over time.

There is a dynamic lineup of artists for the remaining two summer concerts slated for Saturdays, on July 6th and August 10th this year.  Concert goers can indulge themselves with jazz while contributing to a worthy cause. A portion of the proceeds from ticket sales helps benefit the Food 4 Kids Backpack Program with the San Diego Food Bank. This program provides weekend food packages to children from low-income households who are at risk of going hungry over the weekend when free school meals are unavailable.  For more details or for tickets go to http://www.jazzatthecreeksd.com or call the M.A.N.D.A.T.E. Records, Inc. office at 858-650-3190.

Pandemic food stamps offer up to $365 per child