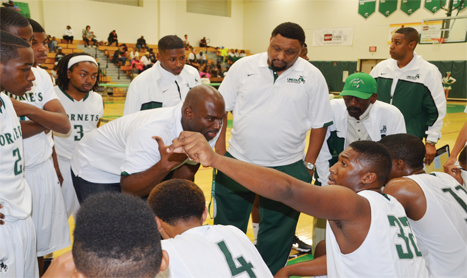 The prep hoops celebration featured some of the best teams in San Diego against some of LA’s top contenders.

It was a long ride back to LA–La Verne for Lutheran High School’s Trojans after their 93-38 basketball lesson from San Ysidro. Skilled hoopsters Orlando Quinones (28 pts) and Lynard Stewart (27 pts) turned basketball teachers for a day, leading the San Ysidro Cougars to Saturday’s easiest victory.

Frances Parker and host Lincoln High School were the two teams to fall short in San Diego’s attempted sweep over the visitors from up north. Undefeated 20-0 Buckley High (Sherman Oaks) remained that way with a 53-52 victory over Francis Parker.

Lincoln’s Hornets were defeated by the fast and furious Venice Gondoliers 86-79. Hornets Steve Garrett had 28 points, Micah Porter had 18, Daniel Melifonwu had 11 and Cory Whipple had 11.

It was survival of the quickest between Hoover and Taft High School. Hoover (San Diego) had to bring their A-game to beat back the attacking Taft (Woodland Hills) team by a score of 73-65.

“It was a hard game. They started pressing us and we were cracking under the pressure so we had to regroup. We cranked up our tempo and took the lead. They started cranking up their tempo to come back, but we played as a team and got the job done,” said Hoover’s Miles Nolen-Smith.

“This is our 4th year and it went well. All the teams showed up and that’s always a good thing,” said Lincoln head coach Jason Bryant. He continued, “Games like these are a good measuring stick for the San Diego teams. I used to coach in LA so I still have some contacts there and due to our success here at Lincoln, teams are willing to work with us. As long as I’m here we will do this every year.”

For a small fee of ten dollars southern California basketball fans were treated to a hoops shootout between America’s Finest City and the City of Angels.