Captions and photos by Tejae Dunnivant

Last week protesters in La Mesa marched in response to the murder of George Floyd in Minneapolis and the incident involving Amaurie Johnson and a local La Mesa police officer. 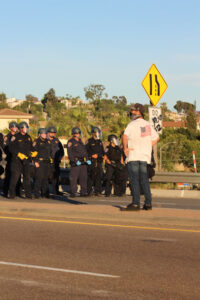 It was unclear if the non-protesters of color were really down for the #BlackLivesMatter movement, or if they were there to invoke violence as part of a white nationalist implant. The protester seen here with the American Flag on his back, was egging other protesters on to rush the blockade of law enforcement. He shouted, “Come on everyone, these guys ain’t sh*t!”

Protester Rasheed Miller was standing yards away from a police blockade off Highway 8 after the government declared an unlawful assembly order giving local law enforcement the right to engage and break-up the crowds. After being out there for a couple hours, Rasheed said that his purpose for being out there was to bring recognition to the police brutality that is happening to people of all races, nationwide. “We appreciate the job of law enforcement, [but] there are times when they go too far. This protest is an example of how tired people are!”