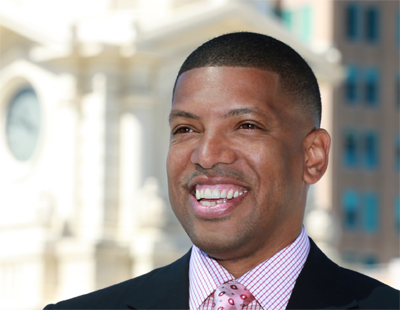 WASHINGTON (NNPA) – Kevin Johnson, the former All-Star point guard for the Phoenix Suns, was in a zone. A year ago, the California native was re-elected to a second term as mayor of Sacramento, his hometown. In 2014, he is scheduled to assume the presidency of the U.S. Conference of Mayors. And after being crowned president of the National Conference of Black Mayors (NCBM) at its annual convention in Atlanta on May 30, he told anyone who would listen: “I’m going to shake things up.”

But how Johnson went about “shaking things up,” led to his abrupt and unexpected downfall. After just 44 days in office, the board formally declared last Friday that his election was invalid and that a new election – in which Johnson is not expected to win – will probably take place in November. What started out as an easy political layup ended in Johnson fouling out with many of his fellow mayors.

Jeff Dickerson, who identified himself as one of the attorneys representing Johnson, said that Friday’s board meeting was improperly called and violated the organization’s bylaws.

The NCBM was already slowly but steadily recovering from a scandal involving its former president. Last September, former St. Gabriel, La. Mayor George L. Grace, Sr., 68, was sentenced to 22 years in prison on corruption charges that included bribery, obstruction of justice, making false statements and mail and wire fraud in connection with his city and NCBM positions.

During a sting investigation called Operation Blighted Officials, the FBI discovered that Grace had secretly registered the Black mayors’ group in Louisiana as a non-profit organization in 2005 and renewed the application on Nov. 25, 2009. He listed himself as the sole officer and his home as its office address. He also opened at least one unauthorized bank accounts in Louisiana in the name of the NCBM.

According to those familiar with the investigation, Grace was able to scam the organization by telling sponsors that Executive Director Vanessa R. Williams was about to lose her job and all contributions to NCBM should be sent directly to him in Louisiana. NCBM Treasurer Maurice Brown, mayor of White Castle, La., was caught in the FBI sting. He was also convicted and is serving a 10-year prison term.

In the wake of the disgrace that Grace brought on the Black mayors’ group, they asked his predecessor, East Orange, N.J. Mayor Robert Bowser, to again take control as president and he and Vanessa Williams began to regain the trust of sponsors after they shared a letter from the U.S. Attorney for the Middle District of Louisiana stating that NCBM, like the city of St. Gabriel, had been victimized by George Grace. At one point, the group’s debt reached $1.7 million, a figure that has been reduced to less than $400,000, according to court records.

Although he had a brief history with members of the NCBM, many of whom had served together in the organization for more than a decade, Kevin Johnson was tapped to serve as first vice president, making him the front-runner to ascend to president at the May conference in Atlanta.

Because of his youth and high name-recognition, many of the mayors, including Bowser, thought Johnson was just what the organization needed as it repaired its tarnished image in the U.S. and as the organization expanded its international appeal.

However, there were immediate indications that this wouldn’t be a match made in heaven.

According to one court document filed on behalf of Bowser and Williams, “During the week of May 27, 2013, NCBM held its annual convention in Atlanta. The organization holds yearly elections for executive officers at these conventions. This year, the Board scheduled the election for May 30. Elections within the NCBM are strictly controlled by Article V, Section 5.4 of the Bylaws, and are subject to numerous levels of oversight and certification. As a general rule, NCBM staff is present to assist with the process.

“The 2013 convention was unusual because elections had not been held during the previous year due to the George Grace matter and this convention had the largest attendance of international mayors in the NCBM’s history. On election day (May 30), several of the international mayors had significant issues checking in to the host hotel, requiring a significant amount of attention from Mrs. Williams and her staff. During that time, Mayor Johnson, who had only been on the Board for two years and had never before conducted an NCBM election, seized this opportunity to call for a vote. No NCBM staff member was in attendance when the call for election was made and the eventual election was conducted.

“More importantly, Mayor Johnson had actual or constructive knowledge that none of the election rules were being observed. In direct violation of Section 5.3 of the Bylaws, Mayor Johnson took an open (show of hands) vote, when secret ballots were required.

Mayor Johnson also failed to convene the requisite Nominations committee, or ensure that all members who voted were then in good standing…”

The petition for an injunction filed on behalf of  Mayor Johnson, says, “…Bowser presided over the meeting at which Mayor Johnson was elected and voted in favor of him for President.”

Minutes of the meeting attached to the filing stated that Bowser called the meeting to order, reminded everyone that a member must be in good standing to vote, and then turned the meeting over Mayor Antonio Blue of Dobbins Heights, N.C.. According to the minutes, “Mayor Blue stated that he was chairing the election of officers to the NCBM Executive Board.”

Eager to put his imprint on the organization, on May 31, the day following the election, Johnson used a special business meeting to make some quick and dramatic changes. According to draft minutes of the May 31 meeting, “Upon a motion by Mayor Johnny Ford, which was seconded by Mayor Oliver Gilbert, the Board of Directors voted to delegate to the Special Task Force, the power of the Board for the following purposes: (1) to comprehensively investigate facts concerning NCBM’s 501 ( c ) (3) status, any litigation involving NCBM, and the financial and business affairs, obligations and duties of NCBM; (2) to supervise the management of the ordinary affairs of NCBM; and (3) to engage Ballard Spahr LLP, as its counsel, and such other professionals, and to take such other actions as the Special Task Force deems necessary and appropriate to accomplish these purposes. The motion passed unanimously.”

However, Miami Gardens, Fla. Mayor Oliver G. Gilbert, III, who seconded the motion, was not a board member.

On Monday, Fulton County Judge Christopher S. Brasher issued an injunction against Executive Director Williams and Mayor Robert Bowser, compelling them to turn over financial records sought by Johnson and Mayor Patrick Green of Normandy, Mo. in order to conduct a forensic audit.

In his order, the judge limited the scope of the request to records from January 1, 2009 to the present and gave the defendants five days to comply with his order. He made it clear that he his ruling has nothing to do with the disputed election.

“The argument over the position held by President Johnson vis-a-vis Mayor Bowser within the NCBM, and the parties’ requirements to comply with the bylaws, have no bearing on the clear statutory duty owed the Defendants to turn these records over, which records are in their possession.” Judge Brasher wrote.

On June 13, General Counsel Susan “Sue” Winchester sent out a memo saying that acting on a request from Florida City, Fla. Mayor Otis Wallace, the parliamentarian, she had examined records of May 30 and determined that the election was invalid.

She also wrote that she had informed Valerie Allen, a partner in the law firm of Ballard Spahr, “that the meeting held on May 31, 2013 did not comply with the Bylaws of NCBM and all of the items in connection therewith had no force or effect. Specifically, Ballard Spahr lacked the authority to represent NCBM. Also, the special task force is not valid.”

In her memo to the board, Winchester wrote in all capital letters: “THE BOARD AND OFFICERS OF NCBM UNDER THE LEADERSHIP OF PRESIDENT MAYOR BOWSER IS STILL EFFECTIVE AND VALID.”