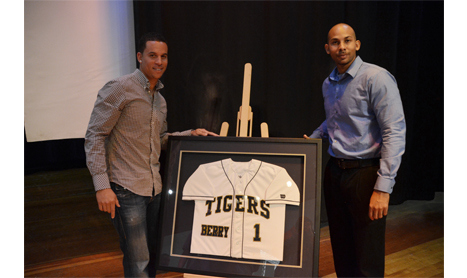 Major League ball players and Morse High School alums Adam Jones and Quintin Berry were invited back to school for a special jersey retirement ceremony at their alma mater.

Former coaches, teachers and teammates showed up at the campus to show their love and support to San Diego’s home grown Major Leaguers. Morse’s current teachers and student body were also in attendance to show their support for the Baltimore Orioles teammates. Their superior abilities and hard work in high school and beyond earned them this monumental day of attention.

“It took me seven years to make it to the Majors. It’s not easy playing in the Minors, everybody thinks you get tons of money but it’s not like that. It’s a bunch of long distance bus rides with little sleep, in little towns with a lot of pressure. It takes a lot of perseverance,” said honoree Quintin Berry. He added, “It’s going to be cool playing on the same team with Adam again. We want to bring that backyard playground excitement to the game.”

The two honorees received the royal treatment from family, friends, staff, cheerleaders and the media.

“I think they both deserved this honor. They are very talented and good character people that represent our community in a positive way. How many times do you get two guys from the same school to make the big leagues? Do you know how hard and rare that is?” Morse alum and event coordinator Charles James said.

“We never expected something like this but it’s really great. I really appreciate this honor and it means a lot to me, it’s good to see some of my old teammates and teachers again,” Adam Jones said. Adam and Quintin are now officially the newest members of the Tiger Hall of Fame.

“We definitely have plans for some more of Morse’s great athletes in the very near future,” Charles James said.