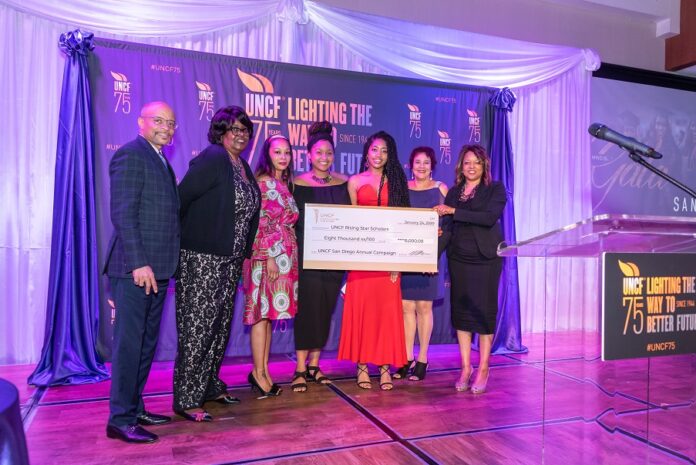 On Friday, January 24th, the local San Diego Chapter of the United Negro College Fund (UNCF) hosted their “A Mind Is….” Gala awards ceremony in the Grand Pavilion at the Four Points Sheraton at 8110 Aero Drive in San Diego. Hosted by Omari Fleming, reporter for Channel 7, the event was one of several events held by local UNCF chapters throughout the country to celebrate UNCF’s 75th year anniversary.

UNCF San Diego presented four $2,000 scholarships to local students intending to go to an Historically Black College or University (HBCUs). Trailblazer awards were given to San Diego District 4 Councilmember Monica Montgomery and La Mesa City Councilmember Akilah Weber, both of whom are HBCU graduates honored for “making a difference in our community.”

Over three hundred attended Friday’s celebration and there was a strong HBCU presence. Event Host Omar Fleming is an HBCU graduate of Hampton Mass, Councilmember Montgomery is a graduate of Spelman College in Atlanta, GA, and Councilmenber Weber is a graduate of Xavier University in New Orleans, LA, to name a few.