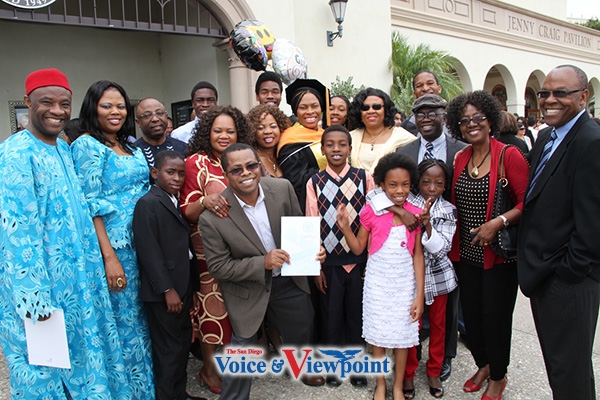 The crowd was patient. Conversations were being held in the hallway and in the rows of the auditorium. Families, friends, colleagues, peers, and the like, awaited the arrival of this year’s graduates. Then a slow and steady clap developed as the audience rose to their feet to welcome the 2014 graduating class.

It was a moment that took seemingly forever to arrive. But once it did. It was all everyone dreamed it would be.

At the University of San Diego’s Institute of Peace & Justice on Friday afternoon, the next graduating class of students of African and African-American descent were celebrated for their accomplishments during their matriculation through the university. There were degrees earned from the PhD level all the way through to the rambunctious and lively undergrads. 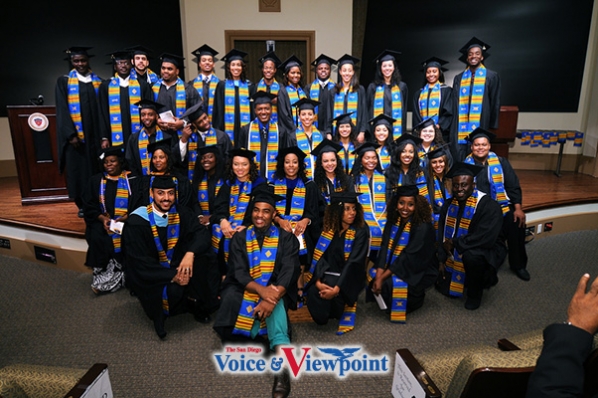 It was only the 6th annual Black Baccalaureate ceremony at USD but there was a comfort level in the festivities. The welcoming sounds of African drums and vibrant movements of African dancers from the World Beat Center set the tone for an afternoon of fellowship and celebration.

Shantell Steve – winner of the Student Trailblazer Award and headed to Brown University to pursue her graduate studies – was also the student speaker. She spoke on the struggles many of the students faced all throughout their matriculation through the university. From financial aid, to family hardships, to academically trying to stay afloat, Steve and her peers had been through it all.

“If there is no struggle,” Steve said in her address, “there is no progress.”
USD is known to create a culture on campus amongst its students centered around pursuing change in their communities and bringing a semblance of peace to their surroundings. Steve was not lost on this fact.

“It is our duty,” said Steve, “to uplift one each other.”

Keynote speaker Joseph Davidson delivered impassioned remarks regarding how proud he is of the work the graduates have done but made sure they recognized just how much was still left to do. He urged the graduates to “take time to enjoy the ride” and to always stress “significance over success”.

“What will be your contribution?,” Davidson said. “I am very excited to see how you answer that question.”

This was an undergraduate class that left its mark on USD, including being responsible for the re-establishment of the Black Student Union.

“My years at the University of San Diego has humbled me through struggles but showed me much success,” said Virgil Hart, an integral part of the BSU re-establishment. “Black graduation was a highlight of my three years here because the legacy of African-Americans at USD has a chance.”

So as each name was called and they were escorted on stage by spouses, grandparents, parents, advisors, friends, siblings, and the like, they could all look at one another and repeat a refrain that Davidson spoke of during his address.

They most certainly had.