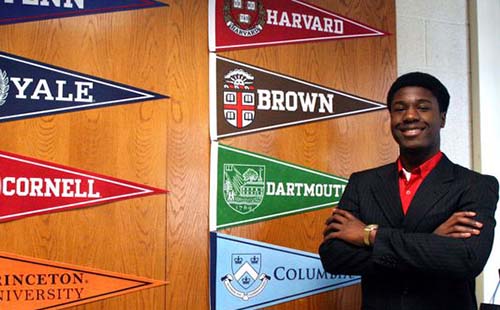 Shirley, NY — 17-year old Kwasi Enin has been accepted to all eight Ivy League universities, something that rarely happens. Enin is an aspiring physician, but doesn’t even know yet which one he wants to attend. He did say, however, that Princeton has offered him the most generous aid package.

He says he got the idea to apply to all eight in 10th or 11th grade when he realized that each school has it’s “own sense of school spirit” and other factors that he liked.

Nancy Winkler, his guidance counselor, comments, “My heart skipped a beat when he told me he was applying to all eight. In 29 years as a counselor, I’ve never seen anything like this. It’s a big deal when we have students apply to one or two Ivies. To get into one or two is huge. It was extraordinary.”

Winkler and other college counselors say that few students even apply to all eight, and almost none are actually invited to attend them all. For example, Cornell University typically accepts only 14% of applicants while Harvard accepts just 5.9%. That means that 94% of all applicants are rejected; That’s how difficult it is.

So how did Enin get accepted by ALL of them?

#1 – He’s an academically gifted young man. According to experts, most talented students end up being females, and colleges struggle to keep male/female ratios even. So admitting Enin was a no-brainer.

#2 – He’s in the top 2% of his class. And he scored 2,250 out of 2,400 points on his SAT. That, according to USA Today, puts him in the 99th percentile for African-American students. Many schools are also making huge efforts to increase the diversity of their student population.

#3 – He’s well-rounded and involved in the community. Enin is a talented musician who plays the violin, and sings in the school’s acapella group. He also volunteers at Stony Brook University Hospital’s radiology department.

#4 – He is a first-generation American. Enin’s parents emigrated to New York from the African nation of Ghana in the 1980′s, and so he was born and raised in the United States. That makes him a first generation American. Colleges like this because it brings a more diverse element to their student population, something that many Ivy League college campuses lack.

#5 – He applied for all 8 schools. You can’t get accepted if you don’t apply, and most students don’t even think about applying for all 8 Ivy League schools. But Enin did, and that is certainly part of the reason why he was accepted to all of them. But he also applied to three State University of New York campuses and Duke University. And guess what? They all accepted him too!

What an amazing story!