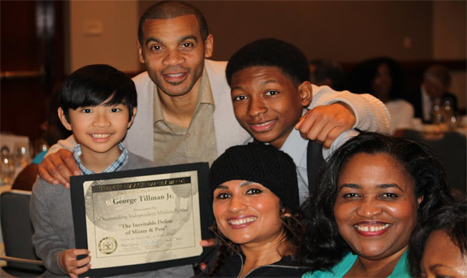 It was a star studded event as celebrities such as Gabourey Sidibe (Precious), China Ann McClain (Ant Farm), James Pickens, Jr. (Grey’s Anatomy), Lauren Lake (Paternity Court) and many others sashayed their way down the red carpet to pose and perform for the many cameras in front them.

This is the 45th anniversary of the NAACP Image Awards and the award luncheon didn’t stop short in throwing a lavish affair a week before the occasion. Host of this year’s luncheon was Roland Martin from TV One’s News One Now and Lauren Lake from Paternity Court. Their larger than life personalities together were enough to entertain attendees, however entertaining moments such as Gabourey Sidibe blowing Roland’s feather hanky as she was receiving her award kept the crowd in stitches throughout the entire afternoon luncheon.

Naturally 7 an international a-cappella R&B group also gave an action-filled performance as they stunned the audience with their talented ability to imitate a band and background music utilizing natural vocal chords only.
One by one, celebrities excitedly approached the stage as Roland called off the prestigious awards and their recipients. An entire group shot was given and many of the celebrities stayed and congratulated one another long after the event was over.

Members of the NAACP San Diego chapter have the opportunity to vote for nominees before February 14th. The chapter also has tickets on sale for those who plan on attending the event and typically every year they charter a bus for all those who decide to attend. This year’s NAACP Image awards will be held on Saturday, February 22. For more information contact Lei-Chala I. Wilson, Esq., President, NAACP San Diego Branch at sandiegonaacp@earthlink.net.