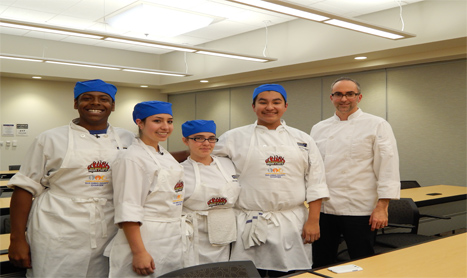 Twelfth graders from San Diego High, Morse High, Hoover High, Madison High and Scripps Ranch High scrambled around the center’s small kitchen areas, creating three course meals in true Iron Chef style, battling each other in a mere one hour time frame (teams were staggered by ten minutes to prevent finishing at the same time for judging). The teams were even issued a secret ingredient, same as the television show. Past secret ingredients include balsamic vinegar, cantaloupe, tofu, and calamari; this year’s was honey.

Throughout their high school career, students who participated in the competition were required to complete a culinary program at their respective schools. The program consists of taking courses in food preparation, nutrition, culinary arts & management, and concepts in hospitality & tourism. Students who completed these courses with a grade of A or B are eligible to earn community college credits, therefore not only learning marketable skills but getting a head start on their future.

The skill level at which the teams were working could have easily rivaled many well-seasoned chefs. Meals were conceptualized by each team, who brought forth astonishingly creative dishes which included, but definitely not limited to, Madison High’s salmon and tuna tartare, and Morse High’s roasted rack of lamb that, undoubtedly, could be ordered from a menu in a five-star restaurant. Meals were evaluated on flavor, presentation and creativity by four judges.

Although all five teams displayed great artisanship and delectable eats that left mouths watering, the team whose cuisine reigned supreme was Scripps Ranch High. However, each of the 20 student chefs received a goody bag. “No matter what, every one of the participants are winners,” commented 36-year veteran chef, mentor and competition judge, Bernard Guillas.

Those words could not ring any truer.