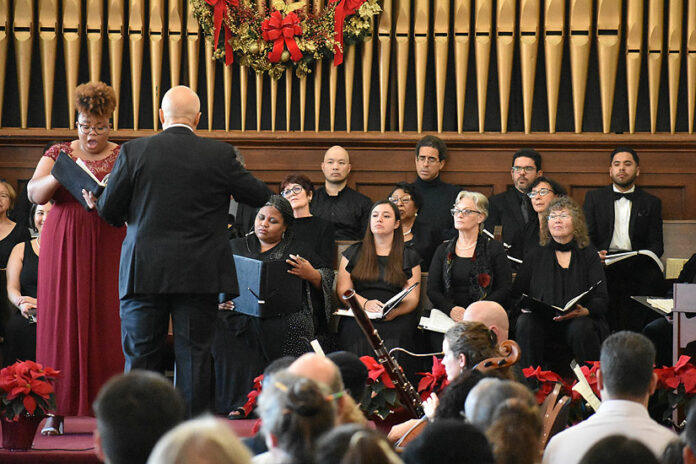 Sunday, December 15th was the time for the Annual Presentation of George Frideric Handel’s Messiah at Christ United Presbyterian Church. The presentation was by the Christ United’s Chancel Choir and featured a Chamber Orchestra along with Guest Soloists. The soloists were Tonia LeBlane Hampton, soprano; Alexandra McBride, mezzo soprano; Jonathan Lacayo, tenor; and J. Craig Johnson, baritone; Juanita Bell as organist and Pamela Monroe on harpsichord.

Dr. Leon Kelly, a retired pediatrician and long time member of Christ United, was the conductor. His role in Sunday’s performance was a fitting one because of his musical background. He grew up in Chicago where his mother, Mrs. Maudeline Kelly and his first music teacher, taught him piano and introduced him to chorale music, as she directed the local church choir.

Dr. Kelly studied cello from age ten until he graduated college, performing solo, string ensemble and orchestra work. He played with the Chicago Youth Symphony and later with the San Diego County Orchestra. Kelly currently serves as minister of Music for Christ United, having directed the Golden Hill/Christ United Presbyterian Chancel Choir for thirteen years with a repertoire that included anthems, spirituals, gospel and cantatas, among which were such works as Handel’s Messiah, Faure’s Requiem and DuBois’ Seven Last Words of Christ. About 300 people were in attendance for Sunday’s performance.