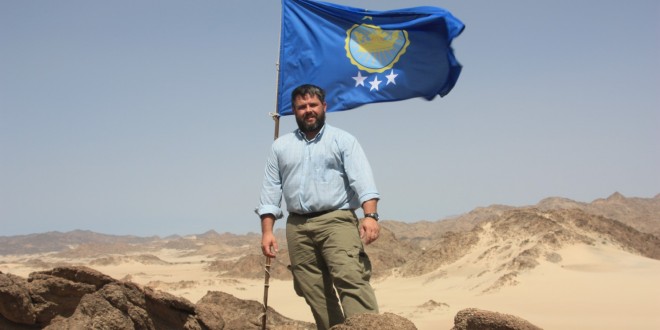 heroes. For the first time, however, the network may make a movie about a white dad who didn’t do anything but swipe a plot of African land so that he could declare his daughter a princess.

A Virginia father claimed the African land, named himself the owner, then made his daughter a princess. Sound familiar? This is how Europeans took over most of the African continent; merely by sailing over, planting a flag, and declaring themselves the new owners.

When Jeremiah Heaton got the wild idea of making his little girl into a princess, he didn’t buy her a backyard castle or build her a tree house like most normal fathers, instead he went and found a piece of land between Sudan and Egypt and proclaimed it the Kingdom of North Sudan. Then he crowned his daughter the princess of the area.

As BreakingBrown reported in 2014, Heaton said he never anticipated going this far for his child.

“As a parent you sometimes go down paths you never thought you would,” Heaton said.

He continued: “I wanted to show my kids I will literally go to the ends of the earth to make their wishes and dreams come true.”

According to Heaton, the world is his daughter’s oyster, and he wants her to know that.

“With a child you don’t want to ever tell them they can’t be something they desire to be, and at age six, her frame of reference for the world was to be a princess. So I told her that she could be.”

So Heaton found a way to claim a piece of African land without paying for it. Sounds like stealing right? Not when there’s a loophole. The land is apparently an “unclaimed” patch of land, so Heaton says it’s fair game.