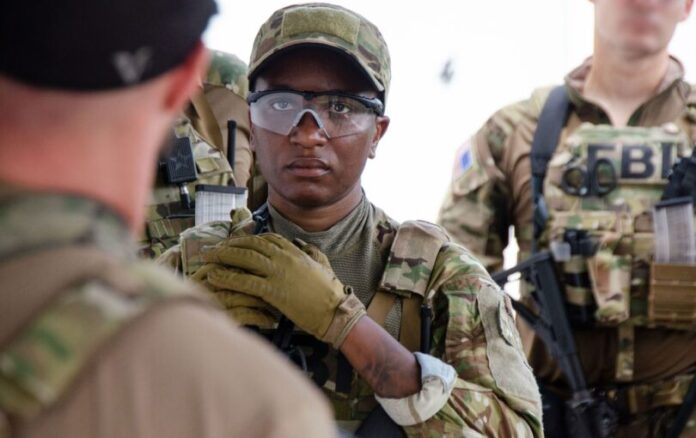 “Hopefully, somebody will see that I was able to do it,” Tai said during a short break between close-quarters battle training and firearms practice. “I’m not the biggest person. I’m not as strong as some of these guys. But as long as you have perseverance – because it does get really tough – you push through it and keep going.”

While growing up, Tai recalled the life-altering event of watching U.S. Marshals deputies serving a warrant in her neighborhood.

One of the deputies stood out for Tai – a Black female.

Tai hadn’t previously seen a Black female deputy, so she approached and questioned the officer who provided the stunned young African American with her business card so they could remain in contact.

For Tai, now a 32-year-old FBI special agent who typically investigates public corruption cases on the U.S. Island territory, the encounter has led to a historic moment.

She’s the first Black woman to train for an FBI Special Weapons and Tactics Team – or SWAT.

“I’m one of those people where I have a task at hand, and I just focus on that task,” said Tai, whose last name the FBI has withheld.

“I don’t really think about people looking at me.”

According to a news release, Tai also counts as a soldier in the U.S. Army Reserve.
She joined the FBI four years ago and has spent her career in Puerto Rico working on corruption cases involving non-elected officials.

Before joining the FBI, she served as a deputy in Orlando, Florida’s Orange County Sheriff’s Office for five years.

The release noted that Tai “was drawn to the FBI after seeing the Bureau’s response to a mass shooting in 2016 at the Pulse nightclub in Orlando, where 49 people were killed.”

“The amount of assets and the professional attitude of agents,” Tai recounted.
“They were organized, and they got stuff done.”

She applied, went through new agent training, and the Bureau assigned her to the San Juan Field Office in 2017.

Almost four years later, Tai and four other agents “were sweating under the heat of a tropical sun, tactical vests, and the exacting scrutiny of field-hardened instructors training up a new cadre of SWAT operators.”

“It’s not for everybody,” stated Special Agent Owen Reese, a SWAT operator leading the training course.

If Tai and her colleagues pass, they join their field office’s SWAT team as probationary members – meaning they can do everything except entering houses.

Probation may last six to 18 months as the new operators gain experience. They are then sent to SWAT Basic at the FBI Training Academy in Virginia, where new operators from all the FBI’s field offices go through three weeks of training to get officially certified by the body that oversees FBI SWAT operations, the Critical Incident Response Group.

“Hopefully, somebody will see that I was able to do it,” Tai said during a short break between close-quarters battle training and firearms practice. “I’m not the biggest person. I’m not as strong as some of these guys. But as long as you have perseverance – because it does get really tough – you push through it and keep going.”
See more of Tai’s story here.