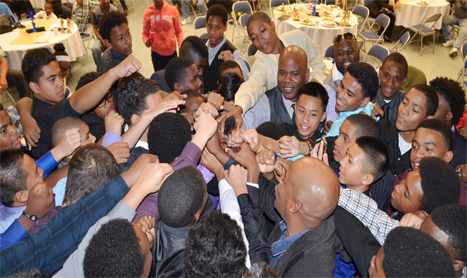 Players, coaches and parents convened at Morse High School’s auditorium on January 16 to honor and recognize the players for their hard work and achievements during the 2013 freshman football campaign.

After the success of the 2012 freshman team, Morse’s newest arrivals were eager to prove they could duplicate or improve on team-twelve’s satisfactory season.

The Morse newcomers finished the season 6-4 and 4-1 in league.
Rebuilding from the bottom up Morse’s football teams have been showing signs of new life thanks to some dedicated coaches, parents and their recent re-connection with Skyline’s youth football association. The new generation Tigers are trying to put Morse football back on top of the prep gridiron food chain.

First year head coach Reggie Webb and his staff spent the evening thanking each and every ninth-grader for their many contributions to the football team.

“This team has a lot of talent on both sides of the ball. They will definitely be a special group in the near future,” said Coach Reggie Webb.

The sharply attired teen-tigers were dressed to impress in their Sunday best. They were treated to a meal fit for champions, video-highlights, speeches of appreciation, and plenty of trophies.

Tiger freshman Keoni Robinson said, “ I could have went to other schools but I choose Morse and I’m glad I did. Morse is a good school for academics and football. I had fun playing this season; hopefully we will even be better next season. I like the coaches and I learned a lot from them.”

After all the speeches, hugs and laughs it was time to officially call season ’13 a wrap. “I would like to thank all my coaches, especially coach Tim Woodson for all the hard work,” said Coach Webb.