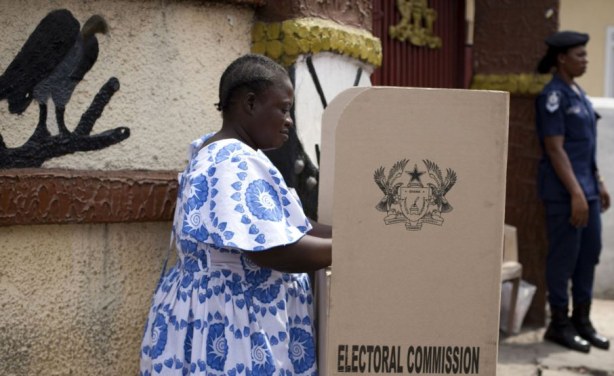 The economy is at the forefront of Ghanaians’ minds as they prepare to go to the polls for presidential and parliamentary elections on 7 December.

Economic growth has halved since the last election in 2012 and incumbent President John Dramani Mahama as well as the main opposition contender Nana Akufo-Addo have made the economy and job creation cornerstones of their respective campaigns. RFI visited Accra’s renowned Makola market to find out how local traders are coping with the downturn.

“People are complaining that they don’t have money – they don’t buy anything,” says Ama Akufo, a trader who sells ginger and garlic which she buys from the Volta region in the east of the country. Each bag is priced at 45 cedis (10 dollars), but she is struggling to make ends meet and complains of being unable to care for her children.

A number of Makola’s traders recounted similar experiences and those selling imported goods have been hit by the exchange rate.

Trader Joseph Asuboteng sells second-hand women’s jeans imported from Europe. “Business is not good because of the economy,” he says, adding that Ghana’s economic difficulties are the reason why he’s voting for Akufo-Addo’s New Patriotic Party. “The NPP candidate is a better man to manage the economy, the man has a vision.”

The Ghanaian cedi has weakened considerably since the last election. On election day in 2012, one dollar bought you 1.8 cedis, according to the XE.com foreign exchange website, compared to 4.2 cedis today.

The weakened cedi has hit traders like Christian Kyei who sells suitcases imported from China. “For the past four, five years if you compare to today, the [price of] suitcases has risen because of the dollar and the cedi,” he says. Sitting in front of a stack of multicoloured suitcases, Kyei says he’s lucky if he sells one or two suitcases a day.

It’s the same story for Ama Morrison who sells clothes in one of the small stores set back beyond the myriad of stalls in Makola. “They’re chopping the money very bad,” she says, explaining that prices for the clothes they import from India or China have risen because they are priced in dollars. Many customers ask for a discount, but they cannot afford to give any. She says the country “needs change” and for that reason she is voting for Akufo-Addo.

Makola market is a chaotic, bustling, sprawling network of roads and side streets. Although it feels busy amongst the traders, shoppers and vehicles all jostling for position, one trader points out that for the first weekend of the month it is relatively quiet in terms of shoppers.

“There’s no flow of money, we’re all suffocating,” says shopper Agbe Seme who’s works as a teacher. “Parents don’t have money to pay the fees so everything is hanging in the air, there’s no money to pay staff,” he says, refusing to reveal who he will vote for in the polls.

Not everybody is blaming incumbent John Mahama for the country’s economic woes. Christian Ezeji has sold fabric at Makola market for 32 years and is supporting the incumbent in the election because he believes the president has made the right choice in spending money on social welfare and infrastructure. “At least he has been trying to equip the hospitals, the schools, building roads, providing water to less privileged areas and other things, so the employment will come,” he says.

Among the dozen or so traders RFI spoke to at Makola on Saturday morning, the majority supported the Akufo-Addo’s NPP primarily because of his campaigning on the economy. It is difficult to determine whether these represent long-standing party loyalists or not. One trader said they would be voting for the Convention People’s Party, a smaller opposition party originally formed by Kwame Nkrumah.

Ghana’s all-important swing voters will be carefully considering which candidate will be best placed to create jobs and get the country’s economy back on track.