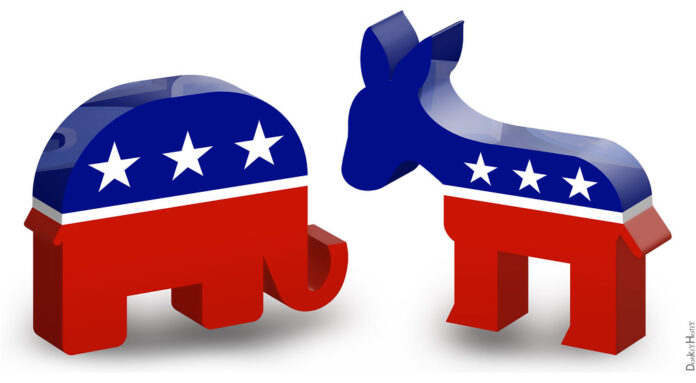 LOS ANGELES (AP) – Republican candidates eager for a turnaround in heavily Democratic California are spotlighting what they see as a dire threat to families and communities – their own state’s policies.

GOP contenders from the U.S. House to city councils are looking to make the November election a referendum on California itself under progressive Democratic rule, pointing to pervasive homelessness in major cities, calls to defund police and shifting government coronavirus orders that have closed thousands of schools and restaurants and recast everyday life for 40 million residents.

In a post on Twitter, Republican U.S. House candidate Eric Early drives by squalid homeless encampments in Los Angeles and faults his Democratic rival, Rep. Adam Schiff, for focusing too much attention on Trump’s impeachment trial while thousands are trapped in a desperate life on the streets.

“Look at what’s being going on on Adam Schiff’s watch,” he says, as the camera pans sagging tents and people sprawled on the sidewalk.

Trump lost California by over 4 million votes in 2016 and remains widely unpopular outside his base. During his term, the president has long sought to make California a byword for government dysfunction and liberal excess on issues from immigration to public safety.

The president will be a drag on many Republican candidates in the state, so the GOP hopes to slant the focus away from the White House race to divisive issues they yoke to Gov. Gavin Newsom and the state’s dominant Democrats, who hold every statewide office, 45 of the state’s 53 U.S. House seats and a strong majority in the Legislature.

Those issues include economic turmoil tied to the virus outbreak; Proposition 16, a ballot proposal that would repeal a 1996 constitutional amendment and allow preferential treatment based on race, sex or ethnicity in public employment, education or contracting; and a homeless crisis that is a national embarrassment.

Also at issue: a polarizing new labor law that seeks to give wage and benefit protections to workers in the so-called gig economy, including ride-hailing drivers at Uber and Lyft. But many freelancers say the law will kill jobs, not improve them, and Uber and Lyft last month threatened to shut down in California.

Rep. Mike Garcia, who in a May special election became the first Republican in over two decades to seize a Democratic-held congressional district in California, summed it up this way during his campaign: “I don’t want my country to turn into what my state has become.”

In the Republican-leaning 48th House District in Orange County, Republican Michelle Steel, A South Korean immigrant who heads the Orange County Board of Supervisors, has seized on the fight over affirmative action and the new labor law known as AB5 in her bid to oust first-term Democratic Rep. Harley Rouda.

She has called for repeal of AB5, saying “Sacramento is intent on pushing more people out of work.” In opposing Proposition 16, which was placed on the ballot by the Democratic-run Legislature, she has warned it would “reinstate racial discrimination” in the name of pursuing equality.

Yet, in an election year that could produce a record Democratic turnout in California, Republican chances of gaining ground are uncertain at best.

Democrats said it’s Republicans who are out of step with state voters on issues from public safety to health care.

“If the election is a referendum on California – the progress we’re continuing to make and the positive agenda we’ve setting for the nation – that’s not a winning proposition for Trump or Trump-loving Republicans,” Schiff said in a statement.

Rouda said he was puzzled by the focus on AB5, which is state legislation. “Either my opponent needs a civics lesson or doesn’t understand which office she is running for,” he said.

The California Republican Party was once a national powerhouse, and Orange County was a foundation block in the conservative revolution that sent the former California Gov. Ronald Reagan to the White House.

But those days ended with a shifting population – many white, suburban voters, the backbone of the GOP, moved away with the collapse of the defense industry while immigration surged. The number of Hispanics, Asians and Blacks has outnumbered whites since 1998, and Hispanics alone now surpass whites.

California has 5 million registered Republicans, but that’s fewer than 20 years ago. Democrats outnumber them today by nearly 2-to-1. The party is also narrowly outnumbered by independents, who tend to vote like Democrats.

The numbers are witnessed at the ballot box: The GOP hasn’t won a statewide election since 2006 and George H.W. Bush was the last Republican presidential candidate to carry the state – in 1988.

The daily squabbling on Capitol Hill can seem far removed from the West Coast, so Republicans are hoping to tap into frustration over day-to-day concerns: lingering anger over beach closures and an economy wounded by virus orders, rolling blackouts, schools reopening or not.

The goal is to drive up Republican and conservative-leaning turnout in races where the GOP remains competitive, including seven U.S. House seats the party lost to Democrats in 2018, four of them all or partly in Orange County.

It’s not the first time Republicans have sought to tag the Democratic leadership with responsibility for California’s ills, whether high taxes, clogged freeways or runaway government pension costs.

In the 2014 race for governor, Republican Neel Kashkari posed as a homeless man in Fresno to bring attention to the emerging crisis. More recently, Republicans in 2018 tried to focus on gas tax increases to drive up the vote.