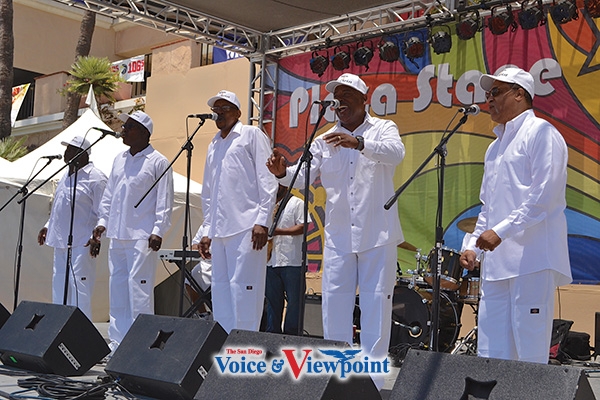 Gospel heavyweights Fred Hammond and Brent Jones blazed the stage at the San Diego County Fair’s 10th Annual Gospel Day. The pair headlined the daylong jubilee, organized by M.A.N.D.A.T.E. Records, with electrifying performances, setting the stage on fire with an atmosphere of worship and testimonies that blessed many in attendance.

Gospel Day’s 10-year milestone was especially momentous for Hammond, who underwent double-knee replacement surgery just a few months ago. The singer put on God’s strength, making himself a living testimony for all to see, as he performed his first show without a cane or any other assistance. He moved a little slower, and was visibly slimmer, but declared he was finally pain free for the first time in 15 years.
Hammond announced to fans his plans to “hang it up” after finishing his next few musical projects. He thanked his fans for, “…taking this journey with me. But there are so many new artists out there, it’s time to make way for them,” he said.

The famous tenor sang with fervor about the love of God in songs like “No Weapon,” “When the Spirit of the Lord,” “Wait on the Lord,” and “This is the Day.” His most recent project, The United Tenors, is a collaborative effort with R&B singers Dave Hollister, Eric Roberson, and gospel singer Brian Courtney Wilson.

Jones, a California native, delivered a high energy performance, never taking his foot off the gas. He was joined on stage with a dynamic group of background singers and dancers, and his wife of 21 years, Shelly. The couple announced their plans to become ordained ministers, and the two are set to release a ministry program for the whole man focusing on health, fitness and the spirit as well.

The crowd came alive when Jones ministered old favorites like “Heaven in the Room” and “Give Him What He Wants,” then gave fans a taste of some of his new music, performing one of his latest hits, “I Can Dance.”

The daylong festivities featured performances from gospel groups like Eddie Baltrip and Fulfillment, Dontae the Artist, and Extreme Gospel Praise. M.A.N.D.A.T.E. Records’ very own Men 4 Christ and Archie Robinson hit the stage, and acts like Laos & Harmony and Stephanie Courtney traveled all the way from the east coast to be a part of the celebration.

M.A.N.D.A.T.E. Records is blessed to celebrate 10 years of gospel music at the San Diego County Fair, and the best is yet to come! The San Diego based record label is excited about the future, and looks forward to many more years giving San Diego gospel at the fair.