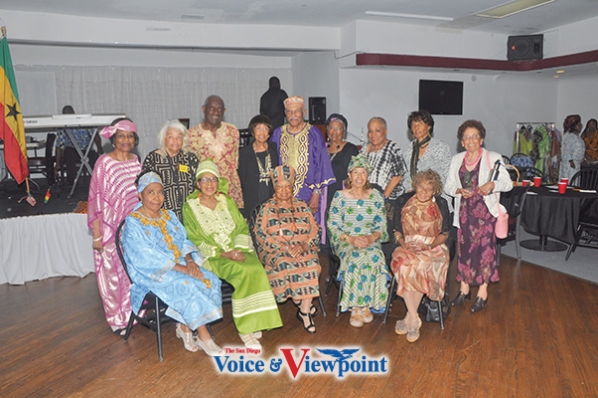 The San Diego Tema Sister Cities Society recently held its annual event at the Alpha Center located at 6323 Imperial Avenue. The affair began with opening remarks by Mrs. Vira Williams, Chairwoman of the affair and Mistress of Ceremony. Dr. Robert Matthews, President of the Society, gave a brief history of the organization.

“Leon Williams, former City Councilman and County Supervisor, had a dream of a sister city affiliation with a city in Africa,” Dr. Matthews said. “The idea was developed by Mrs. Quincella Kimbrough and presented to the International Affairs Board for approval. The San Diego City Council also approved the affiliation and former Mayor Pete Wilson sent a letter to the District Chief of Tema, Ghana inviting that city to join with San Diego as a sister city. In 1975, an official resolution declared San Diego, California and Tema, Ghana to be sister cities.” Matthews explained.

Rev. Alyce Smith Cooper dedicated a prayer with the theme of “Bringing Back Our Girls,” which was in keeping with the tragic “slave/sex traffic” reality that haunts us today.

The members and guests enjoyed an excellent buffet dinner while being entertained by Mr. Samuel Nehemiah, who enlightened the audience with some of his native songs. The atmosphere was further enhanced by the African attire worn by the members and guests, and by vendors who displayed their African art and fashions. Members on the society’s committee include: Clara Cunningham, Vi Jackson, Ardelle Matthews, Dr. Robert Matthews, Charlyne Oslin Smith, Jeanne Young and Vira Williams.