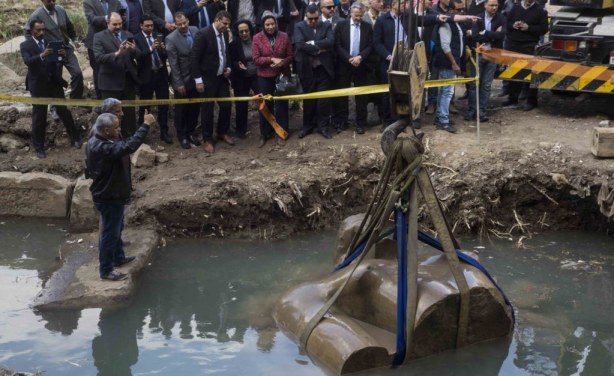 Egypt is known as the land of Pharaohs. Years after the reign of Pharaohs, archaeologists are trying to find more and more remains and evidences of this past world. A statue believed to depict Pharaoh Ramses II has been excavated, an important relic, which could help spur the country’s tourism.

A 26ft (6 metre) statue has been discovered by Egyptian and German archaeologists near the ruins of Ramses II temple. The 3,000 year old statue was lifted with cranes in the ancient city of Heliopolis in what has been described as a great moment for archaeology. Alongside the statue believed to depict Ramses II, they also found a limestone statue of Pharaoh Seti II, Ramse’s II grandson.

According to the BBC, the relics were found in the north-east of Cairo, close to the temple of Ramses II, also known as Ramses the Great, and experts believe it may represent Ramses II. Ramses the Great was the most powerful and celebrated ruler of ancient Egypt.

It is believed he extended the power of Egypt all the way to Syria and Sudan. He ruled between 1279 to 1213BCE.

The torso of the statue was hauled out from deep muddy groundwater using a crane and bulldozer. Last week Thursday, the giant head of the statue was excavated. These excavations are likely to boost Egypt’s tourism sector which suffered set back after the Egyptian revolution.

The Ministry of Antiquities said the statue’s parts would be moved and assembled at the Egyptian museum in central Cairo. It’s hoped that it will be possible to put the two large pieces together.

Once put together and analysed, the two pieces will be moved to the Grand Egyptian museum near the Giza Pyramids, which will open next year. The statue is reportedly made out of quartzite.

The statue was submerged in ground water in a Cairo slum. Many of the residents cheered as the statue was lifted. Residents could be seen taking selfies with the statue. Present during the excavation were the Egyptian Minister of Antiquities, Khaled el-Anani, German ambassador to Egypt Julius Georg Luy. The University of Leipzig and the Ministry of Antiquity in Egypt had a joint effort in the project. The University of Leipzig has been working in ancient Heliopolis, where the statue was found, for more than a decade.