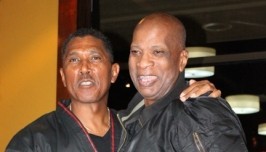 The United Karate Federation and the American Kenpo Association held a joint Banquet honoring grand masters of both associations.

The Banquet/Promotion event was held at the Sunrise Buffet in Kerny Mesa last Saturday evening with about 150 people in attendance from all across Southern California. The audience was a mixture of Old Masters, Students and family and for many it was a great reunion for persons who had not seen each other for long periods of time. The event marked the promotion of two well known local Martial Artists, Reynaldo Leal and Orned “Chicken” Gabriel, both of whom were promoted to 9th Degree Black Belt and recognized by the Worldwide Martial Arts Council as “Grand Masters” of the Martial Arts. 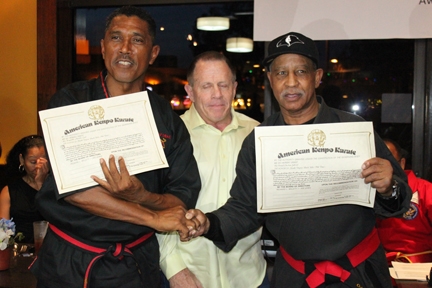 Dr. John E. Warren, a Martial Artist and Pastor, gave the invocation and a special thanks was extended to the hard working committee that arranged the event, bringing Grand Masters from as far away as Colorado and Los Angeles. The Committee members were Grand Master Byron Manack, Grand Master Renaldo Leal, and Master Robert (foot) Sumler.

For additional information of the Worldwide Martial Arts Council visit their web site at www.worldwidemartialartscouncil.com