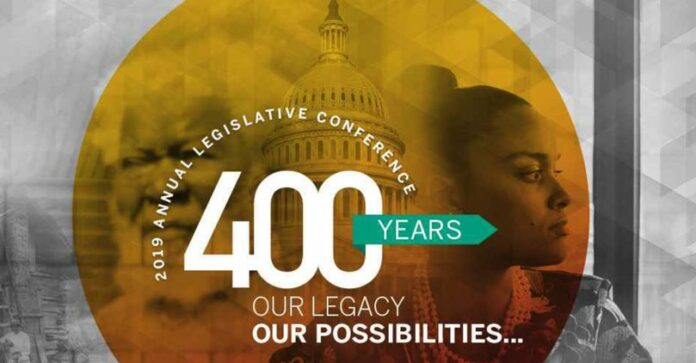 The members of the CBC serve as honorary hosts of issue forums and policy sessions related to topics on education, energy and the environment, criminal justice, science and technology, civic engagement and community outreach, among many others. (Photo: cbcfinc.org)

The ALC kicks off on Wednesday, Sept. 11, at the Walter E. Washington Convention Center in Washington, D.C.

Congressional Black Caucus (CBC) member and convention co-chair Rep. Frederica Wilson (D-Fla.) said the relationship between the Black Press of America and the foundation is vital. She said the NNPA, which represents African American-owned newspapers from nearly every state in the country, remains a trusted partner of the annual gathering.

“Frankly, the Black Press is the only voice that we have because our mainstream news operations would never pick up on something like this,” Wilson said.

“The Black Press of America is the voice of our constituents. We depend upon the Black Press to get the word out to the people who are interested in what black people are up to these days,” Wilson said.

“We know there is so much uncertainty. A lot of that is because of what’s coming out of the White House. The president is so unpredictable,” she said.

“We have a president who is off-kilter, and no one can even predict what’s he going to say daily. The global community is in suspense. He’s dangerous, so we need to mobilize and, as African Americans, stay on message.”

The five-day conference has numerous partners and sponsors, including Bank of America, Coca Cola, Toyota, General Motors, and Wells Fargo.

Each year, Wells Fargo sponsors a Congressional Black Caucus Fellow. The banking giant routinely sends a contingent to the Phoenix Awards Gala, where the young men are known as the Central Park Five and the Rev. Al Sharpton will be honored.

“We also participate in the National HBCU Braintrust during the conference and typically we donate to Advancing Minorities Interest in Engineering [AMIE], a nonprofit that provides scholarships to HBCU students who study in STEM fields at 15 accredited HBCUs with engineering, math, and computer science departments,” Wells Fargo officials said in a statement.

As the CBCF prepares for its 49th ALC, the focus for all involved will be on social, political and economic issues influencing African Americans and all individuals of African descent, said CBCF President and CEO David A. Hinson.

“This year, we’re hosting two national town hall meetings which include the Commission on the Social Status of Black Boys and Men – legislation that’s being pushed by Frederica Wilson,” Hinson said.

“That’s important because what that does is it allows us to focus the nation on the circumstance of black boys and men,” he said.

“A lot of times when you hear people talk, they talk about this ‘plight.’ It’s as if there’s something inherently wrong with black boys and men.

“If you get beyond the inequities that exist within our society, if you take that away, African American boys and men have proven to be some of the most productive people in this country, and we have to look no further than Barack Obama and many of the people that served in his administration,” Hinson said.

The theme of this year’s conference, “400 Years: Our Legacy, Our Possibilities,” commemorates the first Africans landing at Point Comfort, Va. In 1619.

CBCF officials said it’s an important reminder that slavery is a part of the African American legacy and conference participants must look toward the future regarding the collective possibilities of people of African descent.

The ALC is the largest fundraiser of the CBCF. Each year, the five-day conference attracts more than 10,000 attendees to participate in the 13 signature events and over 100 policy sessions.

The members of the CBC serve as honorary hosts of issue forums and policy sessions related to topics on education, energy and the environment, criminal justice, science and technology, civic engagement and community outreach, among many others.

An 11 a.m. opening press conference, and a 4:30 p.m. Sojourner Truth Legacy Project Town Hall, will highlight the first day of the ALC.

Highlights of the conference’s second day promise to include an Emerging Leaders Power Luncheon; a National Town Hall; and the Commission on Black Men and Boys.

On Saturday, a prayer breakfast featuring Yolanda Adams and the annual Phoenix Awards Dinner stand out as highlights.

The conference concludes on Sunday with a Donald M. Payne Fellowship Cruise.

“We will have different workshops that talk about the future, like the one on technology and jobs of the future for our emerging leaders,” Wilson said.

“There are a lot of disparities in health and wellness, and we’ll be talking about that. I’m proud to say that we’re be honoring our exonerated five – the Central Park Five with the Phoenix Award,” she said.

“And, for me as chair, it’s a privilege to honor the Rev. Al Sharpton, our overall winner for the entire Congressional Black Caucus. He’ll receive a Phoenix award, too. The conference will be exciting.”