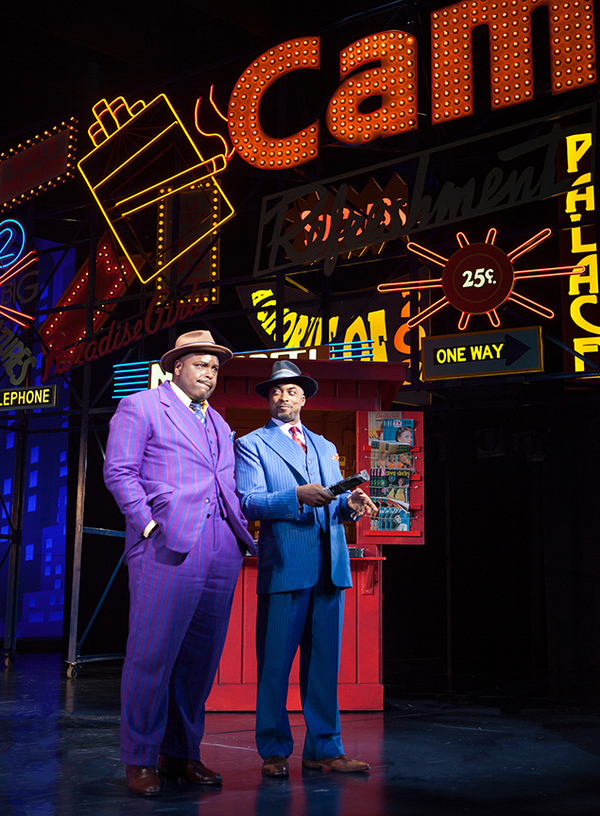 The joint was jumping last Thursday night at the Old Globe’s wacky and wonderful performance of the iconic musical “Guys and Dolls.” “Guys and Dolls” is that nugget of theatre magic with eccentric and colorful characters, a lively and toe-tapping musical score, gravity-defying dancing, and a story line that is pure entertainment. Billed as “a musical fable of Broadway,” director /choreographer Josh Rhodes leads a chock-full-of-talent cast in a masterful re-imagining of the Broadway classic.

Nathan Detroit (J. Bernard Calloway) is the lovable scoundrel whose high stakes illegal crap games are all the rage in 1950’s New York’s seamy side. All the gamblers in town are waiting for the announcement of where the floating crap game will be held, but Nathan is short on cash. Compounding his problems, his longtime paramour Adelaide (Veronica J. Kuehn)–they’ve been engaged for 14 years–has elopement on the brain. Desperate to fund a location, he bets silky smooth Sky Masterson (Terence Archie), another rogue extraordinaire, that Sky can’t woo Sarah Brown (Audrey Cardwell), a sign-toting scripture-quoting Salvation Army repentance recruiter, to accompany him to Havana for a date. Sky accepts the bet but the plot thickens when he, a confirmed sinner, gets goo goo-eyed over the virtuous Sarah.

These are some of the colorful characters created from the wildly imaginative pen of writer Damon Runyon, upon whose short stories the musical is based. Add to the mix Sorrowful Jones, Benny Southstreet, Harry the Horse, Nicely-Nicely Johnson, and you enter a dazzling world of brass knuckle carrying tough guys that win their way into your heart with their simple humanity. Runyon drew great pleasure in observing and breathing life into the underbelly of the Manhattan scene with these vibrant and alluring characters.

From the lively opening scene, “Runyonland,” Josh Rhodes and master scenic designer Lee Savage have created an eye-popping set, with, in his description, “a giant dance story” that serves as a magnificent overture for the grand show to follow.

Terrence Archie as Sky Masterson has just the right amount of swag, and his sly million-watt smile is, well, irresistible, especially to Sarah. She’s the Save-a-Soul Mission doll who, against her better judgment, falls for Sky– the same kind of ne’er-do-well she is hell-bent to save. But it’s all good. In a hilarious scene in a Havana bar—yes, Sky’s powers of persuasion convince the intrigued Sarah to accept the date with him—she imbibes a “dulce de leche” milk shake spiked with some Bacardi, fueling some great rib-tickling moments as Sister Sarah’s stiff social barriers fall away and, with a swoon and a kiss, she lifts her luminous voice in a lovely rendition of “If I Were a Bell.”  J. Bernard Calloway has perfect comic timing as gangsteresque, purple pinstripe suit-wearing Nathan Detroit. He masters all the rhythmic nuances of Hell’s Kitchen dialect and a goofy vulnerability when it comes to his sweetheart, Miss Adelaide. Veronica J. Kuehn nails it as his ditzy, belipsticked, squeaky-voiced burlesque dancer, who, along with her Hot Box Farmerettes, delivers a knockout performance in “A Bushel and a Peck,” complete with colorful suggestive cornstalks and strategically placed sunflowers and glittery petals.

With two African American men in the lead roles (Frank Sinatra and Marlon Brando played the roles of Nathan Detroit and Sky Masterson in the film version), one might wonder if a diversity message was intended. Director/choreographer Rhodes discounts the notion, offering in the program notes, “When you’re auditioning for a show like this, it’s just terribly obvious when the right person walks in the room,” which is what he saw with both J. Bernard Calloway and Terence Archie, both of whom are no strangers to the Old Globe. Calloway beguiled audiences as the Grinch for the past two seasons and Archie charmed as the love-struck Count Orsino in “Twelfth Night.”   “Guys and Dolls is one of the great American fables,” Rhodes continues, “and I believe everybody deserves the right to tell this story.” Amen to that!

So many of the songs from this seminal musical have found their way into the American songbook. “Luck Be a Lady,” “Sit Down, You’re Rocking the Boat,” “I’ve Never Been in Love Before” are some of the standards you’ll find yourself whistling and humming long after you leave the theatre.  “Guys and Dolls,” which runs through August 13, is a joyous and hilarious romp that is sure to put some spring in your step and laughter in your heart. I’m betting my money on it.