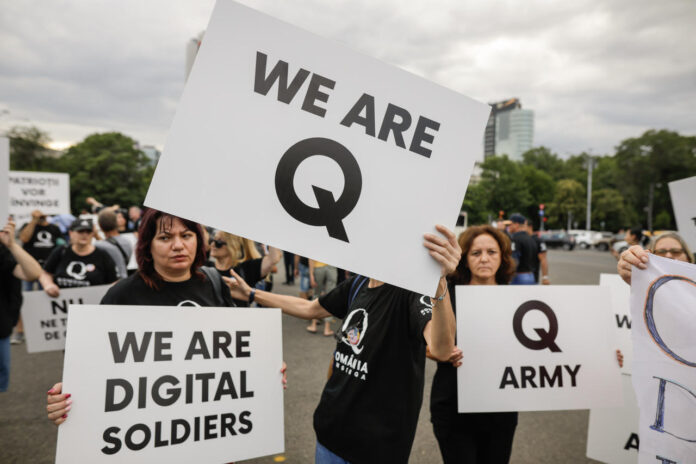 Some Americans had not heard about QAnon before a mob of President Trump’s supporters attacked the United States Capitol on Jan 6.

Believers in what experts call the QAnon conspiracy theory were among several far-right groups that invaded the Capitol and attempted to overthrow the government that day earlier this month. San Diego resident Ashli Babbitt, a U.S. Air Force vet who a Capitol Police officer shot during the chaos, was a QAnon follower.

Last week, three experts from different disciplines gave an hour-long briefing on the history and background of QAnon to a group of California journalists. The virtual meeting was organized by Ethnic Media Services.

According to the panel, QAnon is a loosely organized, mostly internet-based cult that floats several conspiracies that many of its followers believe. Prominent among them is this one: the government is controlled by high-level Satanists who drink children’s blood. The idea of elites drinking blood is tied to age-old anti-Semitic myths.

The group also sees President Donald Trump as their leader, the experts say, and they envision a day when their organization takes control of the government and execute the Satanists. QAnon is also allied with other far-right and White nationalist groups.

Meili Criezis, program associate at Polarization and Extremism Research Innovation Lab (PERIL) at American University in Washington, D.C., says QAnon grew out of a debunked conspiracy theory about pedophiles and former first lady and Secretary of State Hillary Clinton. The conspiracy theory alleged that one of Clinton’s staffers was a member of a group of pedophiles who kept children in the basement of a Washington, D.C. pizzeria. An armed listener of Right-wing talk radio host Alex Jones’s “InfoWars” stormed the restaurant to rescue the children only to find the business did not have a basement. He was arrested and jailed after shooting up the building.

But the myth of pedophiles in Washington preying on children continue to spread on the Internet, especially on YouTube. QAnon is an outgrowth of those misinformation campaigns.