It’s been 25 years since the original Million Man March on October 16, 1995. From the very beginning there were efforts to undercount the number of Black men who marched on Washington, D. C. that day. But Minister Louis Farrakhan, the principal organizer, had contracted with independent sources to do aerial verification of the numbers present. There were over one million Black men participating that day. The Publisher of this paper was there on the Mall and in the City from before sunrise that day until dark, rushing back to San Diego to give “our” story.

What was said that day by the many speakers, including a major address by Minister Farrakhan, perhaps was not as important as what was done, and the statement the Million Man March made to America. Coming two weeks after the acquittal of O.J. Simpson for the murder of his White wife, Nicole Simpson, it brought an abrupt halt to what was beginning to be a White backlash because of Simpson’s acquittal. America was unprepared for the influx of Black men that descended on Washington, D.C. that day. These men were of all ages, but all serious. There was no music, loud talking, cracking jokes or other non-serious expressions or activities. There was just a serious stream of Black men coming from every direction. By bus, train, plane, walking, ride sharing.

There were Black people throughout the D.C. and Maryland and Virginia area who opened their homes to house and feed these men, no questions asked. It was a day on which government offices and most businesses in D.C. closed for fear of riots once they knew that the March was a reality. But all of that was unnecessary. There were no incidents, with the exception of one elderly Black man who had a heart attack during the event. 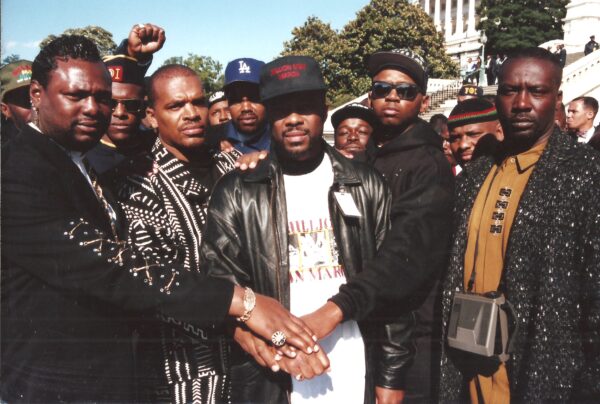 The organizers of the event were the Nation of Islam, the National African American Leadership Summit and local chapters of the NAACP. The Black men that day came from across America, taking off from work and paying their own way. It was by design that this event was held on the Day of Atonement, still celebrated by non-Christian faiths like Islam and Jews. This was that day God set aside once a year for the Priest to come into the Holy of Holies to sprinkle the blood of an animal to “atone” for the sins of man.

So on this day, October 16, 1995, Black men spent a day of brotherhood, reconciliation and atonement to become better husbands, fathers and caretakers of their homes and communities. Much of this was done, and is still being done, in many communities through the creation of Local Organizing Committees (LOCs) following a Blueprint for change and self help which reached into our prisons as well as the gangs on our streets.

The observance of the initial Million Man March has been at 5 year intervals, with returns to Washington, D.C. During the past 25 years, the goals and the pledge of the initial March, and the work of the Local Organizing Committees, has continued. The current Black Lives Matter movement compliments so much of what came before it. The struggle continues. The marches continue, but now without number and without color. Perhaps America is moving toward that “more perfect union” that Minister Farrakhan quoted from the Founding Fathers in his speech 25 years ago on the Mall. An America that finally celebrated a Black Man as President of the United States and now faces celebrating a Black woman as Vice President of the United States