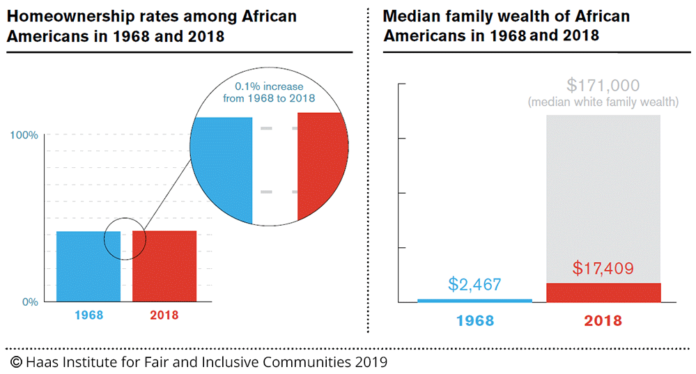 While no amount of money could ever compensate for the loss of Black lives to violent deaths, a growing body of research is delving into the underlying causes for high poverty, low academic performance and — lost wealth. Public policy institutes as well as university-based research from the University of California at Berkeley and Duke University are connecting America’s racial wealth gap to remaining discriminatory policies and predatory lending.

The Road Not Taken: Housing and Criminal Justice 50 Years After the Kerner Commission Report, returns to the findings of the now-famous report commissioned by President Lyndon Johnson. The UC Berkeley’s Haas Institute tracks the consequences of recommendations that were either ignored, diluted, or in a few cases pursued. It weaves connections between education, housing, criminal justice – or the lack thereof.

As many banks and insurance companies redlined Black neighborhoods, access to federally-insured mortgages were extremely limited. At the same time, few banks loaned mortgages to Blacks either.This lack of access to credit created a ripe market for investors to sell or rent properties to Black families, usually in need of multiple needed repairs. Even so, the costs of these homes came at highly inflated prices.

According to The Plunder of Black Wealth in Chicago: New Findings on the Lasting Toll of Predatory Housing Contracts, published this May by Duke University, Black consumers were often targeted for high-cost, unsustainable mortgages during the 1950’s and 1950’s, even when they qualified for cheaper ones. With mortgage characteristics like prepayment penalties and low teaser interest rates that later ballooned to frequent and eventually unaffordable adjustable interest rates, a second and even worse housing financial exploitation occurred.

As reparation proposals are discussed and debated, the sum of these financial tolls should rightly be a key part. While the Kerner Commission recommendations remain viable even in 2019, it will take an enormous display of public will for them to be embraced and put into action.

“The Kerner Report was the ‘road not taken’, but the road is still there,” noted John A. Powell, the Hass Institute’s Director.