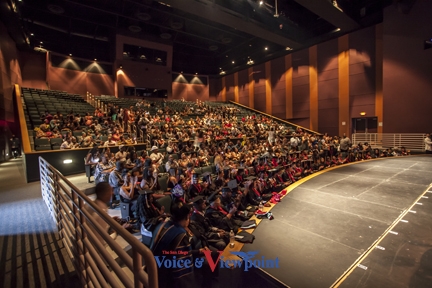 An African drum pounded as each graduate made their way into the Lincoln High School auditorium. Each set of eyes darted back and forth, scanned the crowd and looked for family and friends. Final contact elicited smiles, laughter, hooting, hollering and, in the case of graduate Raysean Liddell, a variation of the dougie.
This was a time of celebration. A time of sighs of relief. A time to reflect on years of triumphs and trials, happiness and heartache, memories and mistakes.

It was time to graduate. 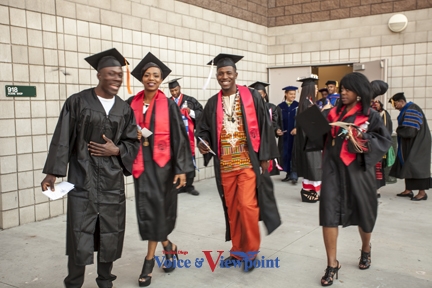 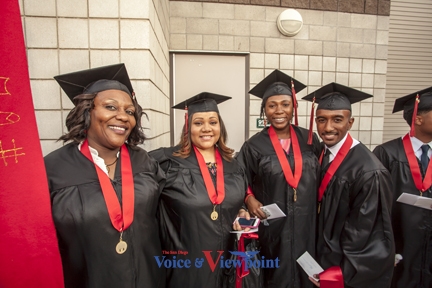 Thursday evening, San Diego State University’s African and African-American graduates brought their bright futures to two rows at the front of an auditorium on the campus of Lincoln High School on Imperial Avenue for the 35th Annual Black Baccalaureate Ceremony – affectionately known as ‘Black Grad’. The festivities were littered with words from faculty, past graduates, poets and peers.

It was simply a night they’d all been waiting for. 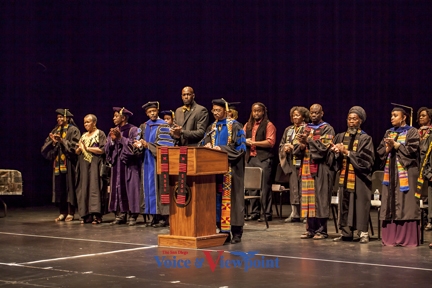 “Black grad was an experience I’ve been looking forward to since my freshman year at SDSU,” said Kristyl Smith, who will graduate in the winter with a degree in Psychology. “I especially loved the entertainment and the charge given by [fellow graduate] Shellie Stamps. Furthermore, keynote speaker Trimaine Davis spoke profound truths that I hope my peers carry with them outside of the walls of our university.”

The entire night’s festivities revolved around the theme, ‘We Are The Change We Seek’. The graduates and their supporters were greeted by words of encouragement and reminders as to the struggle each student has endured in school and preparation for what is to come. Faculty members such as Dr. Joe Johnson, the Dean of Education at SDSU, told anecdotes of his past education and his beloved, Madea.

“Our power is multiplied when we work together,” said Johnson during his remarks. And in the words of his beloved Madea: “I am so proud of you…but you can do better than this.” 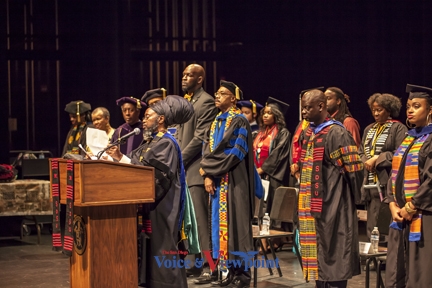 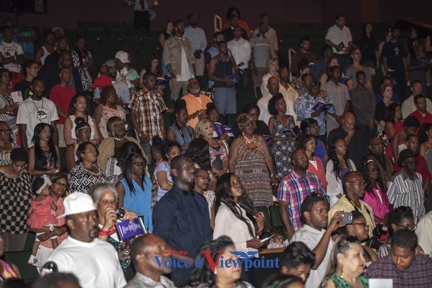 Student speakers Anisa Hagi-Mohamed and Jasmine Henderson gave their own takes on their journeys through school and their futures ahead, with Henderson getting arguably the largest ovation of the evening.
“You have no option but to be great,” said Henderson, during her impassioned speech. “Our history didn’t begin as slaves but as kings and queens.”

Davis provided his own stamp on the evening as he implored the new graduates to be wary of the change they seek. Change should be sought but it must be a change in the right direction.

Black grad offers an opportunity for some to graduate in preferred surroundings, as an appreciation to their experiences and those who came before them as minorities on a predominantly white college campus. For some, black grad is the only graduation.

“Black grad was my official graduation,” said Liddell, who graduates with a degree in Africana Studies. “I did not participate in the commencement ceremony held by SDSU’s College of Arts and Letters. Black grad exemplifies the importance of recognizing people of the rich, diverse cultures that make up the African diaspora for attaining a college degree. A recognition that highlights their perseverance that would otherwise go unnoticed in the other commencement ceremonies.” 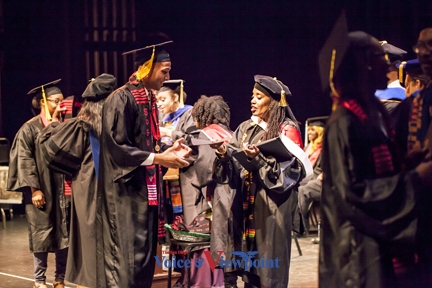 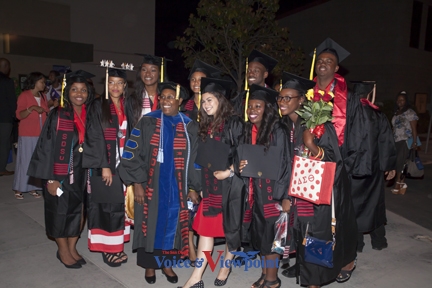 As the students began to hear their names called to the stage, families, friends, fraternity brothers and sorority sisters screamed, shouted and clapped for their loved ones. Some went across the stage in silence. Others danced. Others turned to the crowd and pointed in the direction of their supporters. No matter how one reacted to their name being called, you got the feeling that they each shared in the same journey. Different paths, same destinations.

“Black grad is always such a special experience because you’re graduating with people who have had common struggles and we get to share that victory together,” said Stamps, who graduated with a degree in Africana Studies. “It’s a beautiful experience when the whole community can come and celebrate Black excellence. Our success as students is success for our people.”