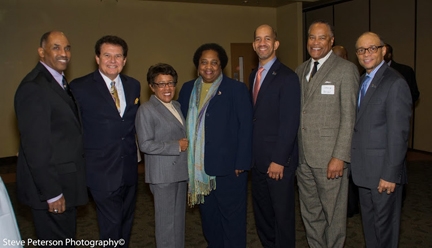 The 1954 Supreme Court decision Brown vs. Board of Education supposedly overruled the 1896 Plessey vs. Ferguson separate but equal standing that allowed states to keep education institutions segregated. However, according to some educators, schools are more segregated today than they were prior to Brown vs. Board of Ed. At last Friday’s 2nd annual United Negro College Fund (UNCF) Leaders Luncheon, the corporate audience was astounded when they heard the state of our public educational system for students of color.

As the moderator began to ask questions in regards to employers and how prepared students are today, all three panelists gave answers that were indicative of their area of expertise. Dr. Constance Carol humbly gave promising data saying, “San Diego Community College district is the largest workforce trainer in San Diego County….23% of our students have gone into healthcare, 12% education, 9% social services, 7% government jobs, 7% manufacturing (robotics) and 6% technology including information technology.” The numbers she rattled off were promising to the future of students that attend community college. But the real problem according to Dr. Weber was “K-12”. “I agree with what Constance,” Weber implied, “Our kids are prepared coming out of the community college, however our K-12 students aren’t being prepared to go to college.”

Weber then started talking about the importance of the new Local Control Funding (LCF) initiative that is coming from the state. According to Weber, these funds are to be set aside for disadvantaged youth in helping them get to college. Unfortunately, if the community doesn’t ensure that the funds are spent correctly, the money could end up being spent on educating children that aren’t in need.

Senator Marty Block made a valid point by saying, “Larger corporations can help by mentoring a child and showing them what skills SDG&E is looking for.” Dr. Weber also told the corporations that their help was needed to make sure San Diego Unified School District allocated the funds correctly.

As the discussion went on, it was clear that many efforts were being made to remedy the state of education for students of color in San Diego.

In her testimonial, student Julia Woods reminded the audience of how important programs like the UNCF were to students such as herself. “Throughout my high school years my mom would always stress the importance of going to an HBCU,” Woods started out saying, “so it was no shocker…when I was accepted into both the HBCU colleges that I applied to. I decided to go to Bennett College in North Carolina.”

It wasn’t long before Woods was speaking through teary eyes as she explained the end to her educational dream due to lack of family finances. Julia made it to North Carolina, however because the utilities were being cut off at home, she flew back to make sure her family was o.k. It was then that her father told her that they didn’t have the money to send her back to school. “So I got two jobs so that our water wouldn’t get cut off because for the longest time growing up we would steal water from the neighbors,” Julia cried, “You see that water in your cup, I used to steal that so I could wash myself.” As Julia went on, her story went from heartbreaking to inspirational as she told the audience that she would do it all over because “through that broken plan, God created a new one for me.”

Julia explained that it was meant for her to go through her situation so that she could be present that day to encourage everyone to put money into the fundraising envelope. “Those envelopes,” she said, “make it so that no other mothers had to look their child in the face and say they couldn’t afford to send them to college.” Julia came to that conclusion when she herself attended a UNCF event and placed her last $3 into an envelope. Julia knew it wasn’t much, but it was something toward helping the next generation of African Americans become doctors and lawyers.

When Julia finished speaking, UNCF Executive Vice President, Maurice Jenkins met her on stage to continue the conversation on the importance of what UNCF does. “100% of the money that is raised here today goes toward San Diego scholarships,” Jenkins confirmed, “We give 12 million dollars a year to San Diego students obtaining higher education.” Jenkins also explained that UNCF is the #1 provider in scholarships for African, Hispanic, Native, Asian and Pacific American students in the Nation. He explained that it was possible because of the Bill and Melinda Gates scholarship. In 1999 the foundation donated 1.6 billion dollars which provides 1,000 students with fully paid tuition toward obtaining their bachelor’s degree each year.
As hope filled the room, Jenkins reminded everyone that there shouldn’t be any reason the donations they received today couldn’t be enough to send Julia back to school. As more white envelopes were handed out, Jenkins assured everyone that Julia would be back at Bennett College in North Caroline as soon as August of this year.

To help the UNCF continue sending students to college, go to uncf.org and make a donation now.