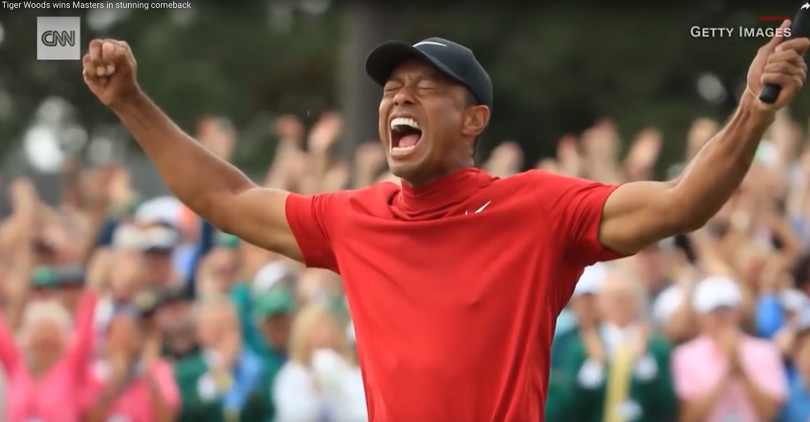 “It’s overwhelming because of what has transpired,” Woods told reporters after he shot a -2 under 72 for -13 under overall to seal the victory. “It’s unreal for me to be experiencing this. I’m kind of at a loss for words really,” he said.

After 11 years, multiple surgeries and a myriad of personal drama, Tiger Woods won his fifth Masters Championship and his 15th career major on a sun-soaked Sunday at Augusta National.

It was the first time Woods had won at Augusta after he was trailing after 54 holes.

The victory also came following years of doubting whether he would ever be able to play at a high level.

“It’s overwhelming because of what has transpired,” Woods told reporters after he shot a -2 under 72 for -13 under overall to seal the victory. “It’s unreal for me to be experiencing this. I’m kind of at a loss for words really,” he said.

The victory, one of the greatest comebacks in sports history, had social media abuzz.

Chavis also noted the tough road Woods had to take to re-emerge as Golf’s biggest star.

“Resilience is in our DNA,” Chavis said, referring to African American and other minorities and certainly acknowledging the challenges overcome by Woods.

Tennis great Serena Williams said the win moved her to tears. “I’m literally in tears watching Tiger Woods. This is greatness like no other,” Williams Tweeted. “Knowing all you have been through physically to come back and do what you just did today? Wow. Congrats a million times. I am so inspired. Than you buddy,” Williams said.

“Tiger! To come back and win the Masters after all the highs and lows is a testament to excellence, grit, and determination,” Obama said.

Fellow golfers like Phil Mickleson, Luke Donaldson, Gary Player and Bubba Watson also tweeted out their respects and congratulations to the 43-year-old Woods.

And, the “Golden Bear,” Jack Nicklaus also expressed his appreciation and awe of Woods. “A big ‘well done’ from me to Tiger Woods,” wrote Nicklaus, whose all-time record of 18 Major Championships is certainly within the reach of Woods, who now has 15.

“I am so happy for him and for the game of golf,” Nicklaus wrote on Twitter. “This is just fantastic.”