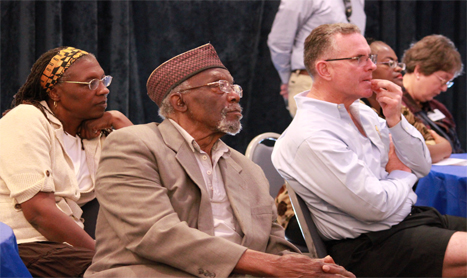 On Friday, January 10 the Catfish Club at the Hall of Champions engaged in a heated discussion on the sensitive issue involving the Barrio Logan Community Plan.

The panel included four people from various interests pertaining to the plan that is now slated to go to ballot on June 3 for a city wide vote. Joe LaCova Consultant for Land Use and Public Policy, Derry Pence President at the Port of San Diego Ship Repair Association, Eric Bruvold President at National University System Institute for Policy Research and Diane Takyorian Executive Director at Enviromental Health Coalition debated the intricacies of the two sides.

The Barrio Logan Community Plan was passed in a 5-4 City Council Vote in September; however the shipping and Maritime industries got signatures to overturn the vote. Much of the conversation at the Catfish Club meeting was about the lies being told in efforts to obtain those signatures. Caught on tape, signature gatherers were telling voters that thousands of jobs would be lost and the Navy would go away.

The original Community Plan was set to allow for a buffer zone between the industrial part of the neighborhood and the residents. The buffer zone would allow for less air pollution to residents, which is why candidate for Mayor David Alvarez pushed for the Community Plan to be passed in the first place. In a previous interview in response to the allegations of lies, Alvarez said, “I think that the misinformation that was spread is quite shameful, especially when it comes from reputable sources, or those who consider themselves reputable.’’

The panelists were driven to discuss the sensitivity of the issues and often words such as gentrification, environmental injustice and finally environmental racism kept coming into the conversation. Yet in still, the few residents that were in the crowd became irritated by the lack of community representation being voiced. Chicano/Latino community member Jaclyn said she was frustrated but that she really appreciated being there. “I trust the information that I get at the Catfish Club, especially before something gets put on the ballot,” Jaclyn said, “I would just like to do something to make sure that the residents and land owners are aware of the measures being brought forward.”

One such resident, John Alvarado stood in anger after the lunch ended and voiced his opinion. “They don’t want our industry,” Alvarado shouted, “They want our land!” Alvarado stated that since the vote was overturned, surveyors have been driving up and down his street looking for prime land to take over. Alvarado also said that he gives credit to David Alvarez and he likes the original plan Alvarez brought forward.

A group of concerned San Diego residents surrounded John Alvarado to ask which way they should vote. Their actions seemed to say that they wanted to ensure their vote would meet the needs of the people of Barrio Logan above that of the business interest.

Black Leaders: State Can Do More to Include Black Firms in Small Biz Support Plans