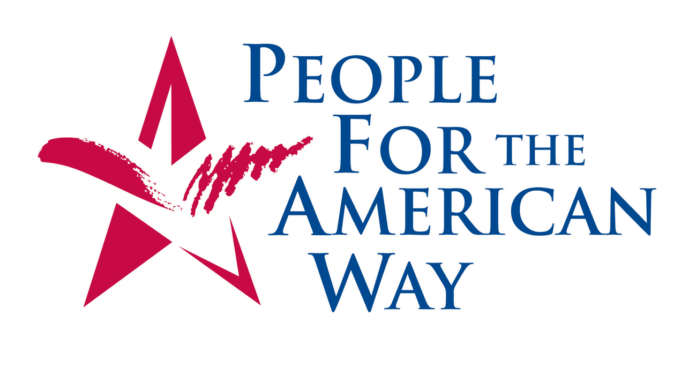 With the 2020 presidential election fast approaching, activists on the extreme right are pulling out all the stops as they cook up outlandish conspiracy theories designed to terrify Americans into reelecting President Donald Trump.

For example, former Rep. Michele Bachmann recently claimed that Black Lives Matter and anti-fascist activists are deliberately creating civil unrest across the country in an effort to destabilize the government so they can impose communism on the United States. Key to the plan, Bachmann claimed, will be the election of Joe Biden to the presidency so he can crash the U.S. economy and establish a one-world government.

Bachmann, who has been serving as a self-appointed “pastor to the United Nations” since leaving office, claimed that the Black Lives Matter movement is run by “transgender Black Marxists who are seeking the overthrow the United States.” These BLM activists, she said, are trying to foment race wars which will provide the pretext for a communist takeover.

“This is exactly what a communist revolution looks like,” Bachmann warned. “They think they’re going to do it by electing Joe Biden and then, once Joe Biden is elected … they think that what they’re going to do is have the United States’ economy collapse, move to a digital currency globally, and then we move into a global-type government. I mean, it’s bizarre, but this is their goal.”

Bachmann wasn’t the only right-wing activist warning about supposed dangers allegedly posed by BLM, but she couldn’t hold a candle to Trump-loving evangelist Lance Wallnau, who warned that, in protest chants where the names of Black people killed by police are called, the movement is using “witchcraft” to bring down America.

Wallnau went on to allege that when cities paint “Black Lives Matter” murals on their streets, they are actually creating a “Babylonian siege engine” that is used as part of a “summoning of demons through a ritual of incantation.”

But when it comes to crafting truly outrageous anti-BLM conspiracy theories, few can match the ingenuity of the so-called “firefighter prophet,” Mark Taylor. Taylor is a former Florida firefighter who transitioned into the role of modern-day “prophet” after claiming to have been told by God in 2011 that Donald Trump would become president of the United States. In his capacity as a “prophet,” Taylor has been an endless source of increasingly bizarre conspiracy theories, such as his claim that Trump has access to technology that can control the weather, his assertion that the late Sen. John McCain did not die of brain cancer in 2018 but was secretly executed by a military tribunals, not to mention Taylor’s insistence that the Freemasons and the Illuminati are using a Satanic frequency to change people’s DNA in order to make them oppose Trump.

One would like to think that Taylor would be shunned by others in the pro-Trump right-wing movement for pushing such obviously absurd claims, but of course, the exact opposite is the case, as Taylor has instead become so popular among denizens of the Trump base that a feature-length movie was made about him in 2018 with the help of Liberty University.

Not surprisingly, Taylor continues to regularly spread baseless and far-fetched conspiracy theories, such as his most recent assertion that BLM and other protesters who have taken to the streets across the country in recent months are actually victims of mind-control whose actions are being orchestrated by “handlers” carrying umbrellas.

“You can’t reason with someone that’s been mind-controlled,” Taylor said. “Do you notice the guys in the streets with the umbrellas? Those are their handlers. That activates the programming. What that does, the umbrella reminds them and activates the violence programming, saying that, ‘If you don’t get violent, we will activate the tormenting spirits that we have placed in you to torment you until you do.’”

And just in case that wasn’t outlandish enough, Taylor recently insisted during a different interview that anyone who votes for the Democrats in the upcoming elections is “supporting Satanism, pedophilia, abortion, human and child-trafficking.” People who vote for Democrats, he said, are committing “spiritual treason, punishable by spiritual death.”

With less than two months to go until the election, it is probably safe to assume that these sorts of claims will seem downright reasonable in comparison to the things we’re going to be hearing from some of  Trump’s extreme right-wing supporters in the coming weeks.

Right Wing Watch is a project of People For the American Way, dedicated to monitoring and exposing the activities and rhetoric of right-wing activists and organizations in order to expose their extreme agenda.