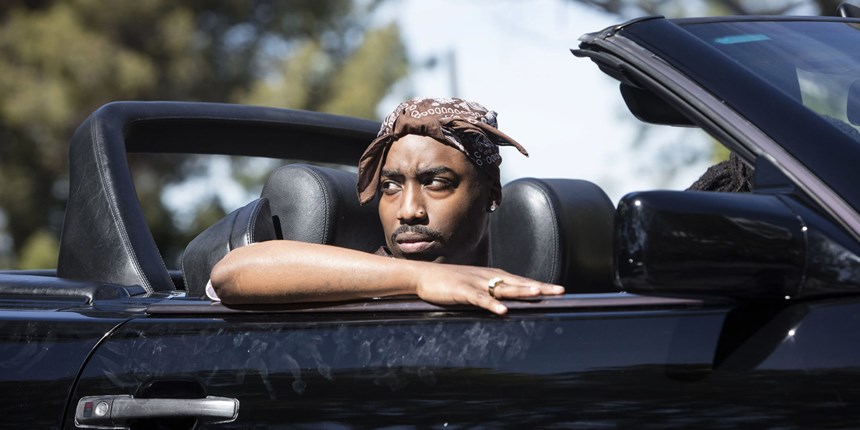 Notorious B.I.G. and Tupac Shakur were murdered more than two decades ago — in 1996 and 1997 respectively — and yet their pop culture presence has arguably never been stronger. Over the past few months, no less than three television specials and special series have focused on them both or individually with a fourth — the USA Network’s limited series “Unsolved: The Murders of Tupac and Notorious B.I.G.” — running right now. (USA Network is owned by NBC Universal.)

On the one hand, it’s clear there’s still a lot of interest in the lives and deaths of these two iconic rappers and the deadly East Coast-West Coast war their soured friendship sparked. But are the shows merely sensationalizing the drama of this period to spark macabre audience interest? Or worse, do these stories actually reinforce negative stereotypes tying hip-hop music to violence?

It’s an assumption that Anthony Hemingway, one of the three “Unsolved” executive producers who also directs most of the series, finds common. For some, Biggie and Tupac were two thugs who lived by the sword and died by the sword. But for Hemingway, who like many others grew up with hip-hop, the picture is far more complex.

Taking its cues from “American Crime Story: The People v. O.J. Simpson,” “Unsolved” tries to push the story of Biggie and Tupac forward through scripted plot and character development.

“Unsolved” is not just a biopic like A&E’s “Biggie: The Life of the Notorious B.I.G.” or Dateline-esque true crime shows like FOX’s “Who Shot Biggie and Tupac?” and A&E’s six-part series “Who Killed Tupac?” Taking its cues instead from FX’s groundbreaking “American Crime Story: The People v. O.J. Simpson,” on which Hemingway also served as a co-executive producer and director, “Unsolved” tries its best to push the story of Biggie and Tupac forward through scripted plot and character development. While the first episode is essentially a primer for people not familiar with the murders, the series’ many layers become increasingly apparent as the episodes unfold.

The series zigzags between the early 1990s friendship between Biggie and Pac — as they were affectionately known — and the pair’s later feud. Along the way, the audience also gets glimpses of the multiple LAPD investigations into the murders that occurred in the 1990s and 2000s. The show’s inclusion of the police investigation is important because it allows showrunners to introduce themes like LAPD corruption and police mismanagement. (This latter storyline is explored in some depth by the character of Russell Poole, a white cop played impressively by “Westworld” actor Jimmi Simpson, whose frustration with the investigation is palpable.) On a larger scale, the format speaks to a broader ambivalence — not just to the murders of prominent rappers, but to the homicides of young, black men, many in their early 20s, all across the country.

The format speaks to a broader ambivalence — not just to the murder of a prominent rapper, but to the homicides of young, black men all across the country.

The general absence of black cops, suggests “Unsolved,” might be one reason for this ambivalence. During the initial 1997 investigation into Biggie’s murder, black cops were noticeably absent. When decorated white detective Greg Kading (Josh Duhamel) heads up the 2006 follow-up task force, it is noticeably more diverse, primarily thanks to Kading’s buddy Daryn Dupree. (Interestingly, Dupree’s character is played by Emmy nominee Bokeem Woodbine, an actor who was also Tupac’s co-star in the 1996 video “I Ain’t Mad at Cha.”)

But, even as more headway is made with a more diverse police team, other challenges emerge. The street code of silence, for example, often stalls law enforcement efforts. Even worse, the line between the cops and the crooks appears dangerously thin, and innumerable inappropriate alliances are exposed.

In interviews, Hemingway has revealed that a goal of the series was to humanize both Biggie and Pac, an attempt bolstered by the casting of real-life New York rapper Wavyy Jonez as Biggie and Marcc Rose as Tupac. Rose also briefly played Tupac in the 2015 N.W.A. biopic “Straight Outta Compton.” Of the two, Jonez is a far closer doppelganger, but Rose also has his moments.

As the series goes on, “Unsolved” offers recaps of the two rappers’ lives in depth. These snapshots allow audiences to experience Pac and Biggie sometimes stripped of their normal swagger and confidence. In these moments of vulnerability, “Unsolved” chips away at the toxic masculinity that was yet another factor in these young men’s deaths. Such personal glimpses, whenever possible, do help humanize these well-known figures. To this end, the inclusion of the mothers, friends and romantic partners devastated by the murders go a long way.

If this series succeeds, it will do so by reminding its audience that the deaths of black men, famous or infamous, are just as deserving of sympathy as the myriad white-focused crime shows that have long been a staple of American television. And by humanizing these characters, the show will hopefully end up interrogating and complicating the link between hip-hop and violence that remains such a force in the popular imagination.

Ronda Racha Penrice is a freelance writer and cultural critic. Her work has appeared on The Root, NBC BLK and the Atlanta Journal-Constitution.