Home Arts and Entertainment Will Packer Drama, ‘Ambitions’ Brings Star Power to OWN 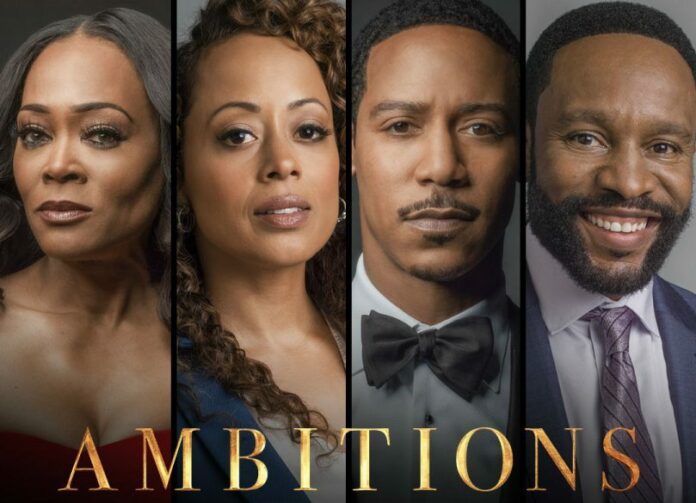 Robin Givens plays the role of Stephanie Lancaster, a sophisticated lawyer hailing from a long line of distinguished attorneys. Stephanie desperately wants to be in charge of her family’s prestigious law firm and will stop at nothing to get it. Brian White is ‘Evan Lancaster,’ the Mayor of Atlanta, who is married to attorney Stephanie Carlisle (Robin Givens). Evan’s dream is to be the first African-American governor of Georgia and there’s no line he won’t cross to get there.

Kendrick Cross stars as ‘Titus Hughes,’ a passionate attorney and dedicated husband to Amara (Essence Atkins). Titus has accepted the challenge of being in-house counsel for a big pharma company run by Hunter Purifoy (Brian Bosworth) to fight a class action suit brought by the powerful Carlisle family.

Brely Evans stars as ‘Rondell Lancaster,’ the sister of Atlanta Mayor Evan Lancaster and manager of the Thelma’s Place restaurant. As the new face of an anti-gentrification campaign, she never thought she’d become a crusader for the people, but it’s a badge she wears with pride – and nobody is removing it.

Created by executive producer/writer Jamey Giddens “AMBITIONS” is produced for OWN by Will Packer Media in association with Lionsgate and Lionsgate-owned distributor Debmar-Mercury.

Benny Boom directed and served as a producer of the pilot episode.

This post was curated by Nsenga K Burton, Ph.D., founder & editor-in-chief of The Burton Wire. An expert in intersectionality and media industries, Dr. Burton is also a professor of film and television at Emory University and co-editor of the book, Black Women’s Mental Health: Balancing Strength and Vulnerability.