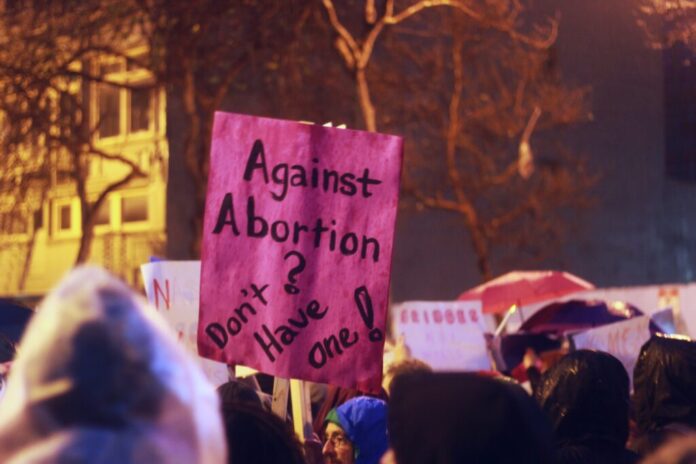 “The leaked SCOTUS opinion on Roe V Wade will set women’s rights back generations,” Illinois Democratic Congresswoman Robin Kelly asserted. “Black women and those living in rural areas will be worst impacted,” Kelly determined. “We must codify the right to safe abortions.”

The startling news about the U.S. Supreme Court’s draft decision to overturn the half-century-old Roe V. Wade law immediately stirred debate over how the document leaked to Politico.

And while that debate dominates the conversation, the importance of the potential ruling and the accompanying repercussions were front and center for women’s rights groups, civil rights advocates, and many Democratic lawmakers.

“Black women and those living in rural areas will be worst impacted,” Kelly determined. “We must codify the right to safe abortions.”

Marcela Howell, president, and CEO of In Our Own Voice: National Black Women’s Reproductive Justice Agenda, cautioned that until the decision is final, abortion remains legal.

“That said, we know that overturning the historic Roe decision after 50 years of legal precedent will be a blow to women’s human and civil rights,” Howell stated.

“As Black women, our fight has always been — and continues to be — about the human right to control our body, our work, and our community.

“This leaked bad decision by the high court will not change that. Attacks on our human rights will always be met with protest and activism. We will not stop until Reproductive Justice is the law of the land.”

On May 2, Politico reported that it viewed an initial draft of a majority opinion written by Justice Samuel Alito circulating inside the court.

The ruling would allow each state to decide whether to restrict or ban abortion. According to Politico, it’s unclear if there have been subsequent changes to the draft.

The news outlet wrote that the draft opinion is a “full-throated, unflinching repudiation” of the 1973 decision, which guaranteed federal constitutional protections of abortion rights, and a subsequent 1992 decision – Planned Parenthood v. Casey – that largely maintained the right.

“Roe was egregiously wrong from the start,” Alito writes.

“We hold that Roe and Casey must be overruled,” he writes in the document, labeled as the “Opinion of the Court.”

“It is time to heed the Constitution and return the issue of abortion to the people’s elected representatives.”

In the nation’s capital, demonstrators immediately converged on the Supreme Court to express their outrage as officials erected barriers around the hallowed building.

Around the country, palpable outrage ensued.

“Chicago will continue to be a haven for those seeking access to the full range of safe reproductive care,” Lightfoot promised.

“We will also continue to fight in Chicago to protect the right to choose and will not stop fighting to protect rights in our surrounding counties and states.”

“The ability to make decisions about when and whether to have children is a fundamental human right. Denying that right has far-reaching implications,” Chancey stated.

She concluded that “there is no greater violation of bodily integrity and basic humanity than government interference in pregnancy and childbearing decisions.

“Denying our constitutional right to abortion relegates women and birthing people to second-class status. We demand full human rights, and we won’t stop fighting until the promise of equal rights under law is fulfilled.”

In hearing of the decision, some recalled the 1969 pamphlet, “Double Jeopardy: To Be Black and Female,” by African American feminist Frances Beal.

“It is idle dreaming to think of Black women simply caring for their homes and children like the middle-class white model,” Beal wrote.

“Black women make up a substantial percentage of the Black working force, and this is true for the poorest Black family as well as the so-called ‘middle-class’ family,” Beal insisted.

According to the Guttmacher Institute, three-quarters of abortion patients in 2014 qualified as low-income or poor.

Black and brown patients accounted for more than half of abortions performed in 2014, and today, Black women are three to four times more at risk of dying in childbirth than white women.

“For poor and working-class women, a disproportionate number of whom are Black and brown, overturning Roe won’t mean that abortions will end. It will mean that safe and sound abortions in health-care facilities will move further out of reach,” author and Princeton University Professor Keeanga-Yamahtta Taylor wrote in an essay for the New Yorker.

Taylor, a professor of African American studies, noted that the dilemma had been a permanent feature of the modern movement for abortion rights.

She pointed to one study that found that 80 percent of deaths caused by septic abortions in New York City in the 1960s involved Black and Puerto Rican women.

Between 1965 and 1967, the Black maternal death rate in Georgia was fourteen times that of white women.

“For these women, access to abortion was not abstract—it was a matter of life and death,” she continued.

“If the Roe decision had simply affirmed that access to abortion was elemental to the social equality of women, it would have become something closer to an incontrovertible right.”

The Guttmacher Institute found that 23 states have laws aiming to limit abortion access, including some states with multiple provisions.

The Guttmacher Institute reported that nine states have pre-Roe v. Wade bans they could immediately enforce if the Supreme Court overturns the statute, and 13 states have “trigger bans.”

While West Virginia, Michigan, and Wisconsin have restrictions on abortion, Alabama, Georgia, Ohio, South Carolina, and Iowa have struck down laws.

The high court appears ready to allow for reversals of the laws.

Seventeen states and the District of Columbia have passed laws explicitly permitting abortions.
“The party of Lincoln and Eisenhower has now completely devolved into the party of Trump,” House Speaker Nancy Pelosi (D-Calif.) and Senate Majority Leader Chuck Schumer (D-N.Y.) wrote in a joint response to the pending decision.

“Every Republican Senator who supported Senator McConnell and voted for Trump Justices pretending that this day would never come will now have to explain themselves to the American people,” the pair wrote.
Vermont Democratic Sen. Bernie Sanders responded by calling for an end to the Senate filibuster so that lawmakers could immediately craft and pass new legislation.

Republicans focused attention on the leak rather than the decision.

Sen. Rick Scott (R-Fla.) claimed the breach shows that “radical Democrats are working even harder to intimidate and undermine the court.”

“It was always their plan,” Scott surmised. “The justices cannot be swayed by this attack.”

But women’s rights groups noted the importance of not allowing for distractions.

“All the people who are minoritized historically in this country and who are poor– it’s low-income women who are going to suffer the most from this, and it’s absolutely maddening,” said Dr. Stella Safo, founder of Just Equity for Health.

“We’re going to do everything we can to keep people safe because that’s what we took an oath for. And no law is going to make that go away.”