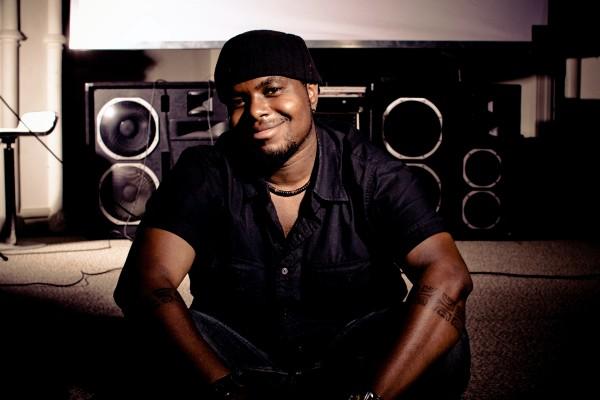 Every artist’s dream is to live off of their craft. For a select few, the odd jobs, waiting tables and flings with the allure of corporate security culminate with an opportunity that changes everything. For renaissance man Gill Sotu, 37, the Jacobs Center for Neighborhood Innovation provided this opportunity by tapping him to become their first ever Artist in Residence. The two year residency will give Sotu the security and freedom to engage his gift as a wordsmith to create plays and other programming for the center. His first production, H.E.R.O.E.S, runs November 13th and 14th. This achievement will be a banner moment for an artist who credits his success to the pulse of San Diego, reading and looking within for guidance.

Love Affair with the Arts

Sotu was born in Illinois. However, he spent his formative years in Oxnard, California. An avid reader in high school, Sotu began writing short stories for himself. The young artist never shared his work with many people until one of his teachers was impressed by his prose. Sotu would later find out his teacher shared his work with other classes as an example of good writing.

“Teachers don’t realize how much they effect kids,” said Sotu. “That touch of kindness got me to write more and more.”

After graduating high school, Sotu spent 4 years in the Navy. During his down time, Sotu continued his passion for reading and writing by delving into classic works, writing poetry and plays to hash out the emotions of becoming a young man. He even started a poetry club on the ship he was stationed on. The expression and imagination of poetry inspired his love for the craft.

“It’s one of the most freeing forms of verbal art I believe that there is,” said Sotu.

After finishing his contract with the Navy, Sotu split time between Oxnard and San Diego building his reputation in the arts scene as a spoken word poet and DJ. Eventually, the energy of San Diego won him over and became his new home.

“In small towns there are very talented people but they don’t have a whole lot of ambition. I needed people around me to push me,” said Sotu. “By seeing all the things (San Diego artists) were doing with their lives, I knew that was going to be something that would inspire me to push even harder. That’s exactly what happened.”

The Magic in Things

Sotu’s hard work paid off as the stars of destiny aligned at a performance by renowned poet Saul Williams, one of his favorite artists and inspirations. In the middle of his set, Williams asked poets in the audience to perform some pieces. Sotu took the opportunity to showcase his talent and caught the ear of Angela Titus, a representative of The United Way at the time.

Impressed by his performance, Titus approached Sotu after the show and commissioned him to write poems for The United Way. When Titus was named Executive Vice President of The Jacobs Center, she arranged a meeting between Sotu and the center’s president Reginald Jones to pitch ideas for plays. A few hours later, Sotu was offered the Artist in Residency position.

“It’s cool to have an artist in your pocket you can bring out. I do a little bit of everything so it works out for the both of us,” said Sotu. “I really believe the magic in things.”

Sotu’s play is based in the future. Because of overpopulation and people living longer, the planet’s resources are dwindling at an alarming rate. As a response, the government uses backdoor legislation to create a department called the Department of Repose (another word for suicide). Volunteers are offered $100,000 if they elect to commit suicide through the department to reduce the population and save the planet. Money goes to families of participants or whoever they choose. People who elect to participate in the program are called H.E.R.O.E.S. (Humans Electing Repose Optimizing Earth Sustainability)

A teacher, the protagonist of the play, realizes people aren’t spending money from the program well. He presents an option to the department to exchange his life for assurance his children get into a great school. When they refuse, he holds the department hostage. The play is centered on what happens to an array of colorful characters inside of the department’s main facility during the hostage situation.  Sotu decorates this grim picture with moments of poetry, music and humor to add multiple layers to the play.

“This play asks the question: What would happen if we stopped paying attention completely to the important things like what laws we’re passing in our community and what things are going on?” said Sotu. “It’s going to be really funny. You’ll definitely laugh, but it will also make you think. I’m excited to put it out into the world.”

Sotu’s words hit close to home as the community of Southeast San Diego still feels the tremors from Penal Code 182.5. The mandate holds individuals documented as gang members accountable for crimes committed by other members even if they aren’t involved. Satire can play a pivotal role in a revolution and opening people’s minds. Sotu’s pen is the perfect catalyst for such an awakening.