Home National As the Numbers of Missing Black Children Continue to Rise, One Organization... 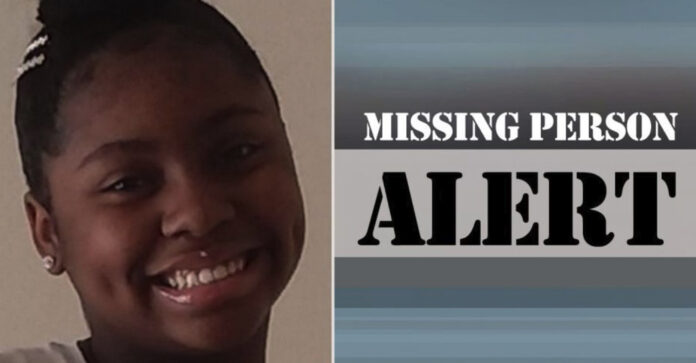 Shurrell, whom authorities said she weighs 180 pounds and has brown hair and brown eyes, was last seen wearing a black shirt, green coat with fur on the hood, tan pants, and black and white sneakers. Anyone with information is asked to call DC police at 202-576-6768 or 202-727-9099.

The 5-feet-8-inch African American female was reported missing from her home in the 2300 block of Good Hope Court in Southeast, Washington, D.C., on Tuesday, February 18.

Shurrell, whom authorities said she weighs 180 pounds and has brown hair and brown eyes, was last seen wearing a black shirt, green coat with fur on the hood, tan pants, and black and white sneakers.

As the National Newspaper Publishers Association (NNPA) continues to highlight the plight of missing individuals of color. One expert said the number of those who’ve disappeared overall is alarming.

“Over 600,000 people are reported missing to the National Crime Information Center (NCIC) every single year. So, on any given day, we have more in the neighborhood of 85,000 active missing person cases on file with law enforcement,” stated B.J. Spamer, the executive director of the National Missing and Unidentified Persons System (NAMUS), a nationwide information clearinghouse that offers free, secure, and easy-to-use technology to help expedite case associations and resolutions.

According to the NCIC, of the 609,275 individuals who were reported missing in the United States last year, 205,802 were black.

Those statistics include 164,769 African Americans under the age of 21.

“The good news is that more than 90 percent of the NCIC entries are resolved each year,” Spamer stated.

The reasons for the purge included: a law enforcement agency located the individual; the person returned home, or the record had to be removed by a reporting authority after they determined that the record is invalid.

“One of the first things we look for is for the family to file a police report,” said Spamer.

Also, once the report is filed, NAMUS can publish the case in its system and offer forensic and analytical resources.

“We can help the family get their DNA profiles, get fingerprints, dental records, and all of the vital metrics that are available. Then we can get into a system where the results are actively compared and identified just in case the worst-case scenario has happened.”

Spamer added that it’s mostly a myth that you can’t report a missing person for 24 hours.

“You hear that especially on television programs, but that’s not an across the board policy,” she stated. When it’s a case involving a child, it’s mandated that every missing child case be entered into NCIC within two hours of receiving that report from law enforcement. So, I would encourage families to immediately report a missing person, especially if they fear that something has happened to their loved one,” she stated.

Finally, Spamer said that awareness is a significant component of getting a missing person home safely. “The media uses certain cases to highlight, and so many other cases don’t get the same amount of attention,” she stated.

“The media plays a huge role in making sure that we raise awareness for all missing persons and also be able to raise awareness of the tools that families have available to them that they may not know are available. We have had families sit down at the keyboard to search the database and find their loved one, essentially resolving their own case,” Spamer added.

“It’s an empowering thing to have families to be able to participate in the search using certain tools that we make publicly available. There are so many resources available today that didn’t exist 20 or 30 years ago when their loved one may have gone missing.

“We would love to see those families come forward today and provide whatever information they still have on their loved one because we are routinely seeing identifications on cases that are 20, 30, or 40 years old. And so as long as there’s a searching family member, it is never too late to file a report, get that case in NAMUS and potentially find a match and bring resolution to that family.”