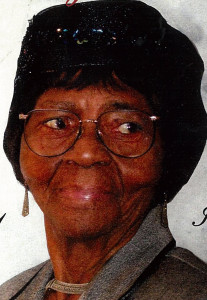 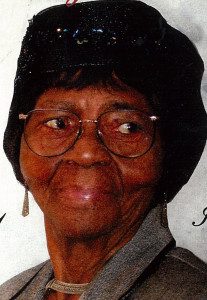 Daisy Smith was born on February 24, 1911, in Pilot Point, Texas, to the parents of Jim Smith and Ann Jackson. Daisy matriculated through school in Pilot Point and became quite a seamstress. She was preceded in death by her parents and three children, Jesse and Tommy Wilkins and one daughter. Daisy was raised in Shawnee, Oklahoma, and grew up in the “Holiness” church Her family was very musical, and, as a child, she traveled with them to local churches in the area including Wetumka, Oklahoma. There, she and her whole family would minister in music, playing the guitar, triangle, cymbals, piano and harmonica and singing songs of praise. Whichever church they were visiting, that local pastor would yield the entire worship and ministry to her family; hence, they would conduct the complete church service for the day. Daisy married Jesse Wilkins, moved to San Diego, California in the late 1930’s and joined fellowship with Jackson Memorial Church of God in Christ (later renamed Fountain of Life Church of God in Christ) under the pastorate of the founding Pastor, Elder Jackson. Later, Elder Junious A. Blake, Sr., (future Bishop of the First Jurisdiction, Southern California) became her pastor, and, in her latter years, she served under her Pastor, Bishop J.A. Blake, Jr. Mother Bishop was a pillar at Fountain of Life, reigning as the oldest member and one of the most tenured members. Being a widow, she married Edd Allison Bishop in 1960. At Jackson Memorial, in her younger years, Mother Bishop participated in the Youth Department, YPWW, Women’s Department and other areas. As she matured in the church, she served on the Deaconess and Mother’s Boards and sang in the Adult Choir. When her health began to fail, she was unable to attend church on a regular basis; however, she became very active in the church’s telephone prayer ministry. She would sing songs and praise God over the phone with other seniors and those who, along with herself, were unable to attend service and were shut-in. At Mother Daisy’s age of 104, her mind was very clear and sharp. When the saints called her, she immediately recognized their voices and chatted with them. She would often initiate calls to certain of her peers and have long conversations as well. At Mother Bishop’s 100 birthday party celebration, she was showered with love from her family and friends. She was a “sweet potato” pie connoisseur and was deemed the best “sweet potato” pie maker in San Diego. She was friendly, family oriented and prayer warrior and was dedicated to and treasured her boys and loved all of her extended family. She leaves to celebrate her home going, three devoted sons, Jimmy, James and John Wilkins; a host of grandchildren, great-grandchildren, great great grandchildren, nephews, nieces, other relatives and friends. Services were held Tuesday, February, 2, 2016 at Fountain of Life Church of God in Christ; interment, Mt. Hope Cemetery. Final arrangements were entrusted to Anderson-Ragsdale Mortuary.