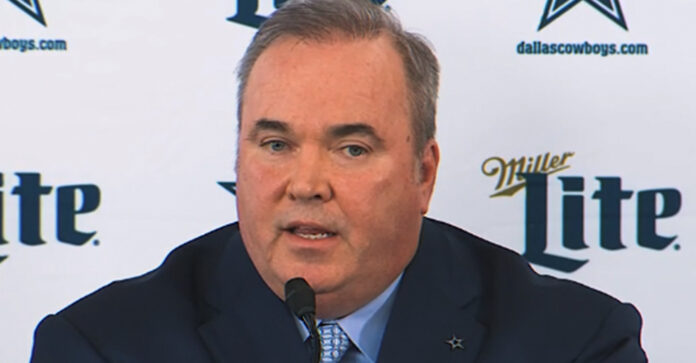 McCarthy, who was 135-85-2 while coaching the Green Bay Packers from 2006 until he was fired on Dec. 2, 2018, following a 20-17 upset loss to the Arizona Cardinals, was introduced Wednesday as the new coach of the Cowboys. He replaces Jason Garrett, whose contract wasn’t renewed after he led the Cowboys to an 87-70 record during his nine-plus years as the team’s head coach.

FRISCO – Mike McCarthy was so comfortable after spending the night at the home of Dallas Cowboys owner Jerry Jones last weekend that he decided to stick around for a while.

For a long time.

McCarthy, who was 135-85-2 while coaching the Green Bay Packers from 2006 until he was fired on Dec. 2, 2018, following a 20-17 upset loss to the Arizona Cardinals, was introduced Wednesday as the new coach of the Cowboys. He replaces Jason Garrett, whose contract wasn’t renewed after he led the Cowboys to an 87-70 record during his nine-plus years as the team’s head coach.

Needless to say, McCarthy, who signed a five-year contract with the Cowboys, knows he has stepped right in the middle of a Super Bowl or bust situation. And he thrives on those types of dynamics.

“But the expectation is going to be trusting the process.”

McCarthy expected to return the Cowboys back to the Bowl

Part of that trust is that Jones believes McCarthy is the coach who can get the Cowboys back to Super Bowl glory. After all, McCarthy did lead the Packers to a Super Bowl victory over the Pittsburgh Steelers nine years ago in a game ironically was played at AT&T Stadium in Arlington.

The Cowboys hope McCarthy can bring some of that magic their way – and real soon.

“I won my first Super Bowl here in North Texas at AT&T Stadium,” McCarthy said. “And I just want to tell you I am anxious and excited to get to work on winning the next Super Bowl for the Dallas Cowboys.”

By the way, when McCarthy spent the night at Jones’ home, Garrett was technically still the Cowboys’ head coach. But Jones didn’t let semantics get in the way of him finally getting the man he thoroughly thinks will lead the Cowboys to the promised land.

Of course, Jones reportedly has a history of meddling with the inner-workings of his head coach. Jones doesn’t like the criticism and added:

“Believe it or not before I got to be involved with the Dallas Cowboys – and that’s all I’m going to say about this – on my desk was, ‘If you’re willing to give others the credit you’ll conquer the world.’ Bam!

“Somehow this thing has turned me into something perceived that I don’t like about it.”

McCarthy knows a thing or two about championship quarterbacks.

Now, McCarthy gets a chance to work with quarterback Dak Prescott while also incorporating running back Ezekiel Elliott into an offense that had its problems this past season when the Cowboys finished the season with an 8-8 record.

“With Zeke, he’s going to get the football,” McCarthy said. “Let’s not make no mistake about that.

“In my own evaluation I’ll have an opportunity to visit with some of the coaches on the current staff, and those evaluations will play into the direction we go with the coaching staff,” McCarthy said. “Special teams will be a priority here.”

Plenty of bro love in the room

Ironically, it is Jones who thinks McCarthy is the special head coach for his team at this time.

“It’s a lightning in a bottle,” Jones said. “I think we were fortunate at this time and his time to catch that right now and get our time to do it was just an opportunity.”

An opportunity that wasn’t lost on McCarthy.

“And I’ll stop right there. We had a helluva time.”

The Cowboys haven’t won the Lombardi Trophy, aka the Super Bowl, in 24 years. Thus, a generation of kids who are now young adults has never seen the Cowboys win a Super Bowl and are personally unaware of their former dominance in the National Football League.

“Lombardi’s are hard to get a hold of, and we know that (McCarthy) has had one of his own right here,” Jones said. “To catch that right now was just an opportunity.”

McCarthy also had some fun at Wednesday’s press conference when, as the Green Bay coach in a divisional playoff game against the Cowboys some five years ago, he threw a challenge flag that led to that infamous reception by Dez Bryant being overturned via replay. A few years later, thanks to some input from Stephen Jones, who is the executive vice-president and director of player personnel for the Cowboys, the NFL changed that rule and added that Bryant did indeed make that successful catch on fourth down.

“I want to tell you exactly what happened,” McCarthy said while laughing. “That was one hell of an athletic play (by Bryant). I was impressed.

“I think it was clearly a technical rule at that time, which Stephen has since gotten changed on the (NFL) Competition Committee. I can’t tell you how many people from Dallas have told me about that play. It was a great catch, I can say now. But it wasn’t then – technically.”

The Cowboys are just delighted that they have what they perceive to be a “great catch” in Mike McCarthy.