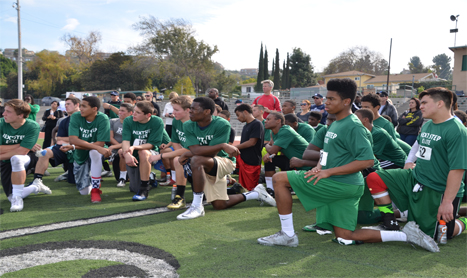 The mission of Next Step Skills is to encourage athletes of all ages to develop their athletic potential by giving them the knowledge and preparation to perform physically and mentally on the field.

“This camp was to honor some kids that we thought excelled this season and could benefit from our camp, and give them some coaching that they might not get at their high school. The high school coaches are very busy and can’t always spend the time on specifics, so that’s where we step in. We have the time to work on the specifics. It’s like a combination of us getting our name out there and helping the kids with their skills, and getting them some more exposure,” Next-Step-Skills coordinator Kevin Smith said.

Highlight tapes were made for the campers and every athlete was evaluated based on their performance. The campers performed the 40-yd dash, 20-yd shuttle, 3-yd cone drill, broad jump, 1-on-1 WR/DBs and running backs vs linebacker, finishing with a 7-on-7 competition contest of skills.

“This camp was pretty cool, you know Lincoln had to represent. We worked hard showing what we could do. I learned a lot, they helped me with my pass drops and helped to enhance my skills. I would definitely recommend this camp for anyone with aspirations to play at the next level,” Lincoln linebacker Johnny Garcia said.

The Elite-68 camp was set up similar to an NFL combine camp and players were also rewarded for their outstanding performances. Grossmont High School’s Khaleed Davis and Del Norte’s Quentin Meeks earned camp MVP honors. Thanks to the joint efforts of Active Youth Scholars Association and Next-Step-Skills, the SD Juniors and Sophomores skills and football IQs were enhanced.