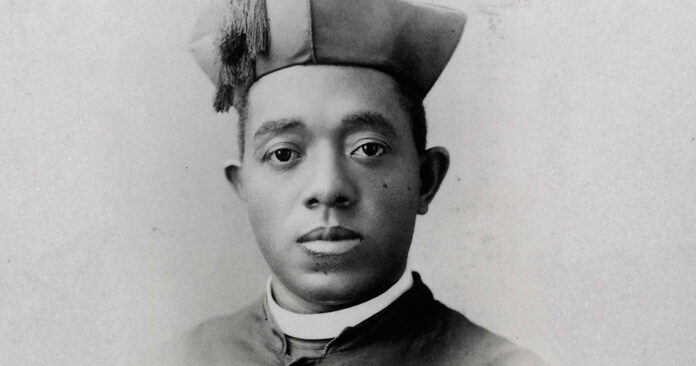 In 1990, the U.S. Catholic Church designated November as Black Catholic History Month, a time to learn and for African-Americans to share our rich culture and the contributions we have made to our Church.

This November, there is increased excitement in the air. Black Catholics everywhere are praising Pope Francis’ June 11th declaration that Father Augustus Tolton (1854-1897), the first African-American to be ordained Catholic priest, had lived a life of heroic virtue. That declaration signified that Father Tolton, a former slave turned priest who endured much discrimination and hardship before his untimely death at age 43, had consistently and exceptionally displayed the cardinal virtues (prudence, temperance, fortitude and justice) and the theological virtues (faith, hope and love) and that he is worthy to ascend to the second stage in the canonization process.

There are four steps in the path to canonization, it is a four-step process. First, a cause is opened and the individual is known as “Servant of God.” After approval of the candidate’s heroic virtues, he or she is named “Venerable.” The next stage, beatification, at which the candidate will be known as “Blessed,” requires one miracle attributable to his/her intercession that has been approved by the pope. Canonization itself requires a second miracle and confers the title of “Saint.”

With regard to Venerable Father Augustus Tolton’s cause, two reported miracles of healing have been attributed to him and are currently under review. Auxiliary Bishop Joseph Perry of Chicago, as postulator, oversees and directs all activity for Father Tolton’s cause.

At the time of the conference, there were four African-American candidates at varying stages in the canonization process: then-Servant of God Father Augustus Tolton, Chicago; Servant of God Mother Mary Lange, Baltimore; Venerable Pierre Touissaint, New York; and Venerable Henriette DeLille, New Orleans. Attendees discussed how they might advance these causes, and the consensus was to increase prayers for their causes.

I spoke recently with Deacon Harry, who now lives in Nashville, Tennessee, his family’s native home. I wanted to hear his thoughts. I know he is a strong believer in prayer. He said he was overjoyed with the pope’s decision to advance Father Tolton’s cause to the next stage and strongly believes that the persistent offering of the intercessory prayers were answered in a relatively short period of time.

Deacon Guess stated that there is a film, “Tolton,” still in production, but he was asked to view a pre-screening of the early scenes that center around Father Tolton’s boyhood. He believes this film will allow people to get to know the man and identify with his life struggles and hopefully will increase prayers to him and for his canonization.

In addition to the four already mentioned, there are now two more African-Americans for whom causes for canonization have been opened; both causes are at the diocesan level of research and approval. Julia Greeley (1833-1888) was a slave in Missouri. Freed by the Missouri legislature, she is known to people in Denver as the “Angel of Denver” for her charity work. Sister Thea Bowman (1937-1990) of Jackson, Mississippi, was known for her extraordinary spirituality and holiness.