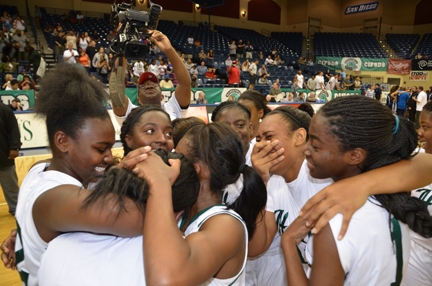 San Marcos’ Lady Knights girls suffered the same fate as the boys team, losing their bid for a CIF title. Helix girls won their first CIF Championship with a 57-45 win over the Knights.

The newly crowned Highlanders’ journey toward greatness began three years ago with the hiring of Coach Pat Tabor. “All the credit goes to my girls, they did this not me,” said Helix coach Pat.
The first quarter of competition was even at 14-14 and the first half ended 26-24, advantage San Marcos.

But the next half saw Briajunae come alive scoring 16 and taking over the game with help from teammates Shirah Hancock, (9) Destini Anderson (9), Irma Ealy (8) and Camryn Owens (7) points. Lady Highlander Irma Ealy added 15 rebounds to assist in Helix’s monumental victory.
“We had a gameplan and we stuck to it. We are a very confident team and we came into this game with the mentality that we were going to win regardless. We made history today,” said Brijunae Shepard. 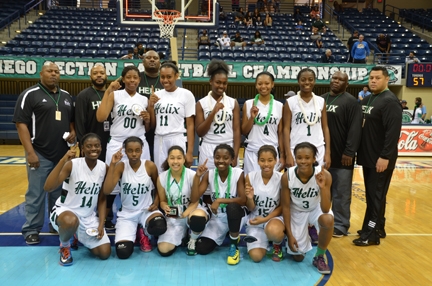 “We started off real sluggish; the worst half of the year by far. Everybody was too jacked up, but once I got them into the locker room and calmed them down, they knew what they had to do and they did it,” said Bishops Coach Marlon Wells.

Despite U.S. Open Loss, Serena Williams is still the Greatest of All Time