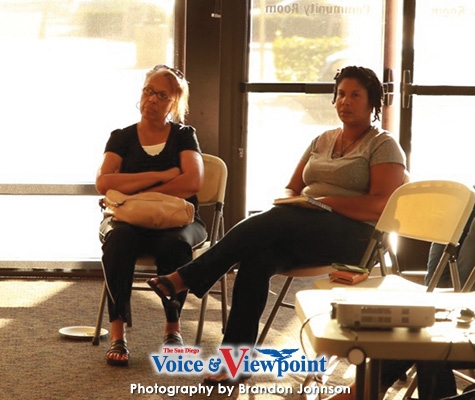 Housing one of San Diego’s premier collections of Art,The San Diego Museum of Art (SDMA) has long been a staple in Balboa Park. Recently The SDMA has sought to take the power of art and use it to further beautify and educate San Diego County through its public art program, Open Spaces.
Funded by a grant from the James Irvine Foundation’s Exploring Engagement Fund, Open Spaces seeks to “create partnerships with new audiences that strengthen San Diego’s cultural environment and celebrate beauty in local communities as well as strengthen our city’s cultural environment,” According to www.sdmart.org.

The staff at Open Spaces has been proactive in not just redecorating areas but in really including the members of the community on their thoughts and learning what they, as a community, would like to see and have represented. Recently residents of the Lincoln Park area convened at the Jacobs Center July 10th, to sit down with some of the organizers of the next proposed project for the intersection of Euclid and Imperial, and toss around potential ideas. Long regarded as an unsafe intersection and often referred to as the “four corners of death” or the corner of Green Cat Liquor, a strategy has been conceived to use public art as a way to rebrand this junction “the four corners of life.” Ideas included having words of encouragement and empowerment to be painted as well as the official proposal of LED lighting on cables suspended across the intersection.

The areas which have begun to receive their first makeovers starting back in 2013 are the Lincoln Park and Logan Heights areas and projects in Lemon Grove and National City are slated to begin this year.
According to SDMA’s website, the goals of this project are to create “permanent, iconic works of public artworks which reflect the unique social fabric of each area, and strengthen a personal sense of identity and place. To spur cultural tourism and demonstrate the positive, economic impact of public art. To engage neighbors in a collaborative art project while building meaningful and enduring relationships between residents and the Museum and Support the imagination, uniqueness, and significance of local communities.”