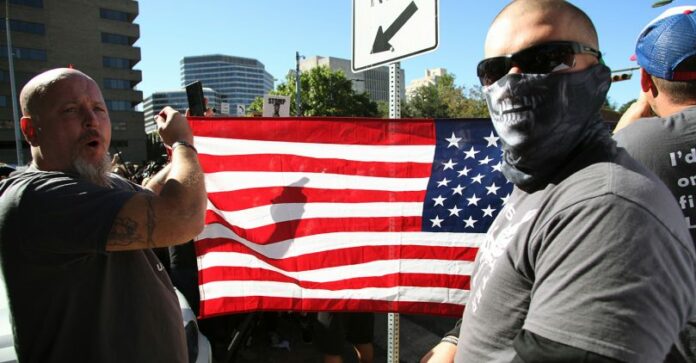 According to ADL’s Center on Extremism, 73.3% of U.S. extremist-related murders in the past decade were committed by right-wing extremists, including white supremacists. Texas’ Republican Governor Gregg Abbott announced that the murders in Texas will be prosecuted as a hate crime. Crusius allegedly posted a manifesto in which he mentioned the phrase “Hispanic invasion.”

After 20 people were reported murdered on the morning of August 3 in El Paso, Texas, by white supremacist Patrick Crusius, the shooting became the 8th deadliest in modern U.S. history and the 250th gun massacre on the 216th day of the 2019. Early the next morning in Dayton, Ohio, a 24-year old white male named Connor Betts shot nine people to death, six of them African American.

The first shooting immediately prompted calls for changing the definition and the language of gun massacres carried out by white males: White nationalist terrorism.

“Our country is under attack from white nationalist terrorism, inspiring murder on our soil and abetted by weak gun laws. If we are serious about national security, we must summon the courage to name and defeat this evil,” wrote South Bend, Indiana Mayor Pete Buttigieg on twitter.  The Mayor of South Bend was not alone in his feelings.

Regarding President Trump’s rhetoric in relation to the El Paso mass shooting, former Texas congressman and presidential candidate Beto O’Rourke said, “He is a racist, and he stokes racism in this country … it ultimately changes the character of this country and it leads to violence.”

Over the last three weeks, President Trump has made a series of racist statements on social media directed at African American members of Congress. Trump was elected on a platform focused on anti-immigration specifically targeted at Mexican immigrants entering the U.S. through Texas.  On October 22, 2018 in Houston, Trump proclaimed “I am a nationalist.”

“You know, they have a word, it sort of became old-fashioned. It’s called a nationalist,” Trump stated. Many observed that the language was a loud signal to white supremacists as a President of the United States embraced their rhetoric.

According to ADL’s Center on Extremism, 73.3% of U.S. extremist-related murders in the past decade were committed by right-wing extremists, including white supremacists. Texas’ Republican Governor Gregg Abbott announced that the murders in Texas will be prosecuted as a hate crime. Crusius allegedly posted a manifesto in which he mentioned the phrase “Hispanic invasion.”

There has been no major gun control legislation passed on the federal level in 25 years. Some of the worst gun massacres have taken place over the last five years.  Fifty-eight people were murdered by Stephen Paddock at a concert in Las Vegas in October 2017. Omar Mateen murdered 49 people at Pulse Nightclub in Florida in June 2016, and 32 people were murdered at Virginia Tech in Blacksburg, Va. in 2007 by Seung-Hui Cho.

Democrats in Congress, led by Minority Leader Chuck Schumer (D-NY) has called on Senate Majority Leader Mitch McConnell to call the U.S. Senate back in to session to pass legislation related to background checks for firearms.